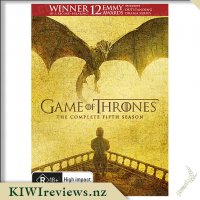 Disclosure StatementFULL DISCLOSURE: A number of units of this product have, at some time, been supplied to KIWIreviews by Roadshow (NZ) Ltd or their agents for the purposes of unbiased, independent reviews. No fee was accepted by KIWIreviews or the reviewers themselves - these are genuine, unpaid consumer reviews.
Available:
March 2016

A plethora of compelling storylines play out to their inevitable, often bloody conclusions in Season 5 of HBO's blockbuster, Emmy award winning drama series.

In the wake of the numerous shocking deaths of Season 4, the season opens with a power vacuum that the various players all across Westeros and Essos scramble to fill. At Castle Black, Jon Snow must balance the demands of the Night's Watch with those of the newly arrived Stannis Baratheon. Meanwhile, Cersei struggles to hold on to power in King's Landing; Jaime embarks on a secret mission; Arya seeks out an old friend; Tyrion--now a fugitive--finds a new cause; and Daenerys finds that her tenuous hold on the city of Meereen requires hard sacrifices. Game of Thrones is one of those series that people go crazy about. Not gaining too much traction until Season 3, episodes such as "The Rains of Castamere" a.k.a. the Red Wedding, quickly gave the show a cult status, and soon enough everyone was watching it, or at the very least knew a number of people that were pining for the next episode. Five seasons in, and the TV series is still going strong. But let's start with a disclaimer; this DVD is rated R16 (graphic violence, sexual violence, offensive language, sex scenes, and nudity). To put it bluntly, if you are likely to be very offended by seeing rape, incest, murder, and homosexuality (I'm not too sure why I feel the need to mention that last one), then this may not be the show for you.

A series based on several families (Houses) that tread political lines and wage war with one another with the goal of becoming the ruler of the Iron Throne. Game of Thrones have become a must-see (or must-read if you prefer the books) due to the writers lack of loyalty to his characters. By this, I mean that he has no qualms at killing off any of them at any moment. Such writing will lead the viewers/readers to be rather gripped to the plot, not wanting to miss an episode, as it may be the final showing of their favourite character.

Season 5 starts off at a slower pace than previous seasons with a more political approach, with less domination and forceful conquest, instead replacing it with more monarchical leaderships, civil unrest, and religious uprisings. It provides for a much tenser viewing as importance of the armies is reduced, and how "good" a character is becomes more significant. In terms of major characters, Arya Stark (Maisie Williams) has a limited role in this season. Rather anti-climactic as it lacks the action that we have become accustomed to. Instead the season focuses more around Tyrion Lannister (Peter Dinklage), Khaleesi a.k.a. Daenerys Targaryen (Emilia Clarke), and Sansa Stark (Sophie Turner). Despite the slow start, it rapidly accelerates during Episode 8, and maintains the action and suspense for the rest of the season.

As well as the 10 episodes, the DVD includes 12 audio commentaries, deleted scenes, and other features; such as the real historical events (e.g. the War of the Roses) and people that inspired the Game of Thrones storyline. The audio commentaries are done by a variety of people from different areas; from producers, to special effects, production managers, and actors/actresses. While some commentaries are a bit monotonous and dull, others are livelier, and it is really interesting to see how many women are involved in the creation of the series. It provides a greater appreciation of the show, hearing how much work goes into the lighting, textures, set placements, and the complexity of such seemingly simple things as the design of the hoods on outfits. That being said, I need to mention that the special features are spread between the discs, and that you need to watch the episodes first before watching the bonus features, as they contain many spoilers.

To sum up the season quickly; there is MORE dragon, MORE white walkers, and LESS deaths of major characters. A lot of content for the price. Great value.

In this modern-day twist on Washington Irvings classic, Ichabod Crane (Tom Mison, Salmon Fishing in the Yemen) is resurrected and pulled two and a half centuries through time to unravel a mystery that dates all the way back to the founding fathers. Revived alongside Ichabod is the infamous Headless Horseman who is on a murderous rampage in present-day Sleepy Hollow. Ichabod quickly realizes that stopping Headless is just the beginning, as the ... more...