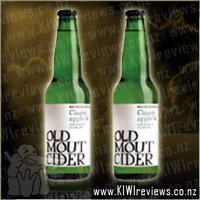 Disclosure StatementFULL DISCLOSURE: A number of units of this product have, at some time, been supplied to KIWIreviews by Old Mout Cider or their agents for the purposes of unbiased, independent reviews. No fee was accepted by KIWIreviews or the reviewers themselves - these are genuine, unpaid consumer reviews.
Available:
at selected quality retailers

Old Mout Classic Apple comes from our original recipe; a light, clear cider with a crisp finish, to be enjoyed when you get a hankering for a taste of the good stuff.

Looks: Clear and light with just a touch of blush from pressing on its skins
Smells: Apple blossoms and springtime
Tastes: This is apple, pure and simple - an easy drinking cider with a nice balance of sweet and tart

Give it a go with fresh, light flavours like calamari salad, seafood tempura, as well as sweet or savoury crepes. It's also hard to beat with crackers and some hard cheeses.

Old Mout's Classic Apple is not a flavour I had really had much of until recently. I went and got a four pack with my usual Boysencider last week. I'm a fan of all ciders, but hadn't really had a straight apple cider in such a long time. There are just so many different fruit blends these days. What I liked about the classic apple was, it tasted as it should. It's nice and refreshing, the taste of apple is really clear, but like a muted apple juice. These not a lot of tartness to it, but there is the alcohol fizz which balances the softer apple tones.

My first experiment with the Classic Apple Cider was to make sorbet. I took a cup of the cider (had to drink the rest of the bottle, what a shame!), 1/2 a cup of sugar and some lemon juice. In a saucepan I heated the lot til the sugar dissolved and then chilled it overnight. In the morning I put the mixture in my ice cream maker and let it go. The mixture came out perfectly, though my husband thought it was too sweet. A good excuse to keep playing with the cider sorbet concept.

The next thing I tried was a recipe that Old Mouth put out for Cider Sausages. We had these tonight for dinner. I cut up some pre-cooked sausages and then added some cider to the frypan and let the cider reduce as the sausages cooked. My husband was not too impressed with his kitchen and lounge smelling "like a night club" (hot alcohol apparently). But I enjoyed the taste that resulted. The sausages had a nice sweet flavour to them, and the apple flavour was subtle but present. I found this to be a good all purpose sort of cider, though not my favourite flavour of the range.

This was my first taste of cider. When I first took a sip it instantly made me think of beer. It was bubbly and had that bitter taste that I associate with beer.

It wasn't a taste that I would usually go for, but began to adjust to the taste after a few sips. While this still made me think of beer, I have to say that it had a much nicer taste.

It didn't really taste of Classic Apple to me, not too sure what it taste like really. More like, a can of beer with a teaspoon of apple... But, I got used to the taste and quite happily finished off the bottle.

With just 4.5% alcohol, it was enough to give me a little bit of a buzz, which was nice. I wouldn't spend $14.99 on this though, as it's just a little expensive for my tastes considering that there are only four bottles.

Overall, a nice enough taste. Not something that I would buy, but I would drink it again.

Old Mout's "Classic Apple", to me, was like a cross between the Scrumpy and the Boysencider. With a crisp, refreshing apple taste that was sweet enough to cover up the usual harsh alcoholic sour bite (except for just the tiniest hint of sour in the aftertaste... not unpleasant though), yet still had just a touch of that "dryness", the Classic Apple cider was just as yummy whether straight from the fridge, or left to sit at room temperature.

The apple taste was definitely noticeable, without being overpowering and reminded me a lot of an alcoholic version of Appletise. This was definitely sweeter than the Feijoa cider, although not quite as sweet as the Boysencider, and had next to no smell at all.

An easy contender for my 2nd favourite, the Classic Apple cider is a great choice on its own, or to enjoy with a meal.

Ahhhh, this is what a traditional cider tastes like. I have been a cider drink for many years now, (well spirits were getting way to pricey) and so I moved onto ciders, and I have for many years been trying to find a good cider. I have found some that have come close, but none that I would call perfect, well until now that is. This is what I would call the epitome of a good classic cider and is now my preferred classic cider drink.

After the Boysencider this one would be my next favorite. I am a huge lover of anything apple, especially when it comes to drinks, and so really looked forward to trying this one.
It is a classic apple flavor, not too strong or sweet or tart, just right for me. Very enjoyable.
The other great thing about these ciders is that they come in lovely packaging, they do not look cheap and nasty or so expensive that you would pass them up at first glance when looking to purchase a cider.

i just didnt really get into this one as much as the other three flavours in the range. dont get me wrong there is nothing actually wrong with it. it just didnt really stand out from the others at all since it had no definite point of difference. it was lovely on its own. it was even nice when mixed with some sparkling grape juice and poured over ice cream with some fruit salad. it was still a lovely drop when stuck next to a glowing bbq grill carbonising some meat for lunch. but was it spectacular enough for me to want to go and buy more? not really. not after the boysencider had stolen my heart and tastebuds. for those who like a classic (translation: bog standard) cider this is a great example of a quality brand. for those who want to drink something a little different from the run of the mill then you will want to explore the rest of the range.

There was a very distinctive clean apple taste with this flavour. It was sweet but not overly so. It went down very well with a hot chilli.

This flavour was also not too bubbly, making it very easy and enjoyable to drink. There was almost no bitter aftertaste with this one.

This didn't rank very well with me out of all the four ciders, coming in at third. Overall, this was a very nice beverage.

This was a really nice, classic apple cider indeed. But it also had something unique about it that I cant quite put my finger on. Whatever that subtle point of distinction is, it worked for me. This one ranked right up there for me, mainly because it took me back to younger days sipping pints of cider while listing to good, and not so good, live music at the local Irish pub with friends.
One of the best things about a classic, plain cider is that if you want something different, it's only a hefty dollop of some fruit syrup away. The traditional raspberry cordial, blackcurrant juice, a dash of orange or lemon syrup, were all good ways to take your favourite drink and make it something different, just for a change. And you know, that trick still works on this too. Mind you, if you want to go berry'wards, you should try their Boysencider first.
All in all a very tasty, delightfully flexible drink that really hits the spot on a hot day.

As a drinker of 'bog standard' cider for many years, it's occasionally nice to try something a little different - you never know what gems you will discover - but it is also nice to go back to familiar ground.

This cider took me right back to my student days, when a pint of cider was the only thing I drank while at the local Irish pub listening to a live band belting out the classics from the Emerald Isle. For an extra treat, a dash of blackcurrant juice on top turned it from 'fizzy apple' to 'alcoholic ribena'. (Please forgive the shameless use of a disgraced brand name.)

Smooth on the way down, a slight bite as it passes the back of the throat, and a warm glow spreading through the limbs as the alcohol gets in on the act... great memories. I had to fight the urge to slap on one of my Jacky Tar CDs to complete the memory.

Overall, a wonderful drop, worth checking out. It went wonderfully with a plate of BBQ'd meat, a creamy potato salad, and some chips'n'dip for lunch. I am excited to find it is available in larger bottles, but that pleasure is tempered by the fact the cider in plastic just never tastes as good as the same stuff stored in glass.

Established in 2000 in the Nukuhou North Valley, 30km south of Whakatane in the Eastern Bay of Plenty, this boutique winery is driven by a passion for making fruit wines.

Enjoy the wine early for it's finest character.