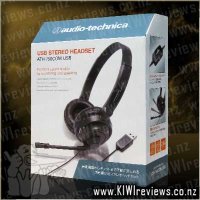 Disclosure StatementFULL DISCLOSURE: A number of units of this product have, at some time, been supplied to KIWIreviews by Jansen Pro Audio or their agents for the purposes of unbiased, independent reviews. No fee was accepted by KIWIreviews or the reviewers themselves - these are genuine, unpaid consumer reviews.
Available:
online or instore

ATH-750com USB Stereo Headset provides excellent sound quality for monitoring and speaking. With it's built-in condenser microphone and 40mm CCAW voice coil drivers, this unit is perfect for online gaming or VoIP calling. Featuring a compact folding design and an inline volume controller with mic-mute button, this is professional equipment.

As professional gear, these are a pretty high-end brand - people who know their stuff use this brand, so I felt a little overwhelmed and under-prepared to assess such gear, but we were given it to do, and do it we did.

First off, the ease of installation - total no-brainer. Windows XP and up will recognise it easily with no need for added drivers - unless of course you did a 'minimal install' in which case be sure to have your authentic, genuine Windows install disc(s) handy.

Fire up your preferred audio app - Soundbooth and Audition from the Adobe Creative Suite range in our case - and select the appropriate input/output devices, if the software hasn't already done it for you. After that, it's a breeze - because it's all about your selected software after that point.

One critique I do have about the headset though - the size of the earcups was too small for me. I like the larger caps that surround the ear entirely and sit against my skull. These were quite a bit smaller than I am used to, and sat against the ear itself, sandwiching my ear and the arms of my glasses between my skull and the rather firmer-than-I-like cup padding. It was the *only* thing about these I disliked.

Everything else I encountered impressed me greatly. The boom mic - despite the fact you could swing it through only one plane - was very sensitive, yet did a very good job of squelching and cancelling any hash and hiss from the background, leaving only a clear sound track that needed only minor adjustments to be crystal clear... and to be honest I suspect the ONLY reason that final adjustment was needed was the rather loud background hum of my PC case, which sits up on top of the desk with one side off, to make swapping hard drives in and out a lot easier. No fault of the headset at all.

I was very impressed with the 3.5mm to 6.3mm plug adaptor - When you think about it, it seems so obvious that it should screw on rather than just clip on... because then you won't leave it behind in the device by accident when you unplug! So simple and obvious, yet it's the first time EVER I have seen it!

Overall, a most excellent bit of gear, which made doing the narrative tracks for our YouTube channel videos far less of a nightmare than our first attempt was. If it had larger cups, I think I would have been able to give this a few extra points, but after an hour of wearing these, my ears were getting very sore where the arms of my glasses were squeezing them. A small thing... and that was the problem.

The revolutionary design of the Arc Mouse combines the comfort of a desktop mouse and the portability of a notebook mouse. Arc Mouse folds to 60% of its fully expanded size when you're on the go. Two colour options to match your personal style.