The Twilight Zone: Season One review 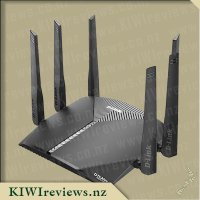 Disclosure StatementFULL DISCLOSURE: A number of units of this product have, at some time, been supplied to KIWIreviews by the company for the purposes of unbiased, independent reviews. No fee was accepted by KIWIreviews or the reviewers themselves - these are genuine, unpaid consumer reviews.
Available:
at all major electronics stores

•  Luxuriate in lag-free, buffer-slaying video streaming and online gaming - Crazy-fast combined Wi-Fi speeds of up to 400 Mbps (2.4 GHz) + 866 Mbps (5 GHz) + 1733 Mbps (5 GHz)
•  Keep malicious threats at bay and safeguard online privacy - Built-in powerful McAfee protection for every device on your network
•  Works with the Google Assistant and Alexa - Give your smart home Wi-Fi a new voice
•  Monitor your kids' internet activity - Comprehensive parental controls
•  Advanced Wi-Fi Mesh - Turbocharge your whole home network with intelligent functionality
•  Easily handles everything you throw at it with high-power 880 MHz dual-core processor
•  Test Internet speed - See how your Router-to-ISP connection measures up
•  Free D-Link Wi-Fi app - Set up and manage your network from your smartphone 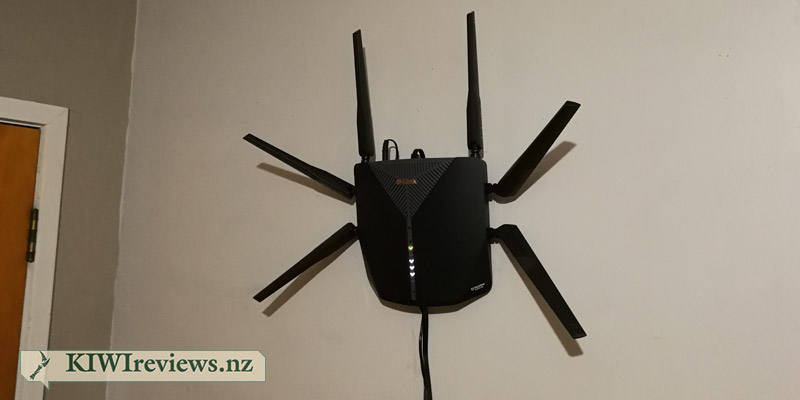 Just before Christmas, I was lucky enough to get my hands on this little beast. Black, sleek, yet somehow still retaining that slightly facehugger'esque styling that seems to be an inevitable side-effect of the need for an increasing number of external aerials to handle the growing number of channels devices are offering... and needing... to cope with the growth in "smart-home devices". Homes these days are becoming expanding clouds of little things that all talk to each other, co-operating to carry out our every whim.

Because of this, there is an ever-growing number of 'digital back doors' in every house's virtual infrastructure. The devices themselves are too singular in task and small in format as to carry much in the way of protective armour of their own, which is why it is time for more routers like this. With the device comes a host of protection to wrap around your personal digital domain, including a 5-year subscription to McAfee Network Security and 2-year unlimited-devices subscription to McAfee LiveSafe. There is also a suite of parental controls that allow you to configure a range of protective features against malicious content - not just malware, but also sites and services that you may not want your kids interfacing with. However, despite being powerful and flexible, they are nothing you haven't seen elsewhere so I'll save you the time reading stuff that you probably know already. TL:DR - they work, and work well.

On another aspect of security, the router will automatically check for, download and install firmware updates as they come available. This is an often-overlooked aspect of digital security that many people never even think of, let alone stay on top of. As new security breaches come to light, updating the firmware to block these paths of intrusion is vital, so if you forget to do it you are vulnerable to attack. Firmware updates are also often rolled out when better code has been developed to get more performance out of your hardware - like giving your car engine a clean and retune. Having the hardware look after this mundane but important job for you removes a layer of worry and replaces it with extra peace of mind.

This device touts itself as Mesh-network ready, but what does that actually mean? It means that if your broadband connection is located in a spot that creates a WiFi dead zone elsewhere, you can add on a number of the D-Link DAP-1820 WiFi range extenders, and you don't need to mess about configuring them. They will talk to the router and set themselves up easily, no geek-squad required. Unlike some 'extenders' that create a second access point under the same SSID name, these units act together to create a single, seamless network coverage zone so your devices don't have hiccups if you are streaming data while moving between zones.

While I do not subscribe to the joys of voice-command Home Assistants like Alexa or Google Assistant, this device is fully compatible with those units and should, in theory, work flawlessly to give you voice-command over your home network. Tasks such as rebooting the router - if you need to 'try turning it off and on again' become simple tasks that can be performed from anywhere within hearing range of your home assistant. Personally, I don't see the point in that, but I know that little things like this are a great way to open the way for a wider uptake of the technology.

In terms of hardware performance, the CPU in this beast is quite capable of handling the massive digital through-put the tri-band WiFi has room for. Most standard routers, especially ones a few years old, struggle to cope as the workload builds - and with an ever-increasing number of smart devices appearing in homes, workload is a major factor to pay attention to. It used to be just laptops and mobile devices, but now even domestic smoke alarms are appearing on the market that will hook into your Smart Home system to add extra layers of awareness and protection. Add to that mix the smart appliances, home security sensors, music players, wearables... the list keeps growing. So this unit comes with a hefty engine to handle all the extra processing required to maintain clean flow through the WiFi band. Buffer-free gaming and media streaming, even while there are a host of other devices all adding their bit of clutter to the stream, is a reality again.

Enabled with D-Link's SmartConnect technology, this beast will not only carry the load easily, it will also direct your devices to connect to the band most suited for them - low-traffic devices such as smart sensors and small wearables will get shunted to the 400Mbps 2.4GHz band, gaming consoles will get put onto the high-speed 1733Mbps 5GHz band, and devices with moderate needs will get slotted into the 866Mbps 5GHz channel. The built-in MU-MIMO (Multi-User Multi-In Multi-Out) technology also adds another level of efficiency to the data flow mix.

To handle the devices that don't have wireless capability, there are 4x gigabit ethernet ports on the unit, plus a USB 2.0 port - perfect for attaching a regular printer to so that everyone has access wirelessly - and a USB 3.0 port - which is a great place to pop a portable hard drive to act as a network-accessible storage buffer or media server. Add to the mix the gigabit WAN port, you won't find this unit causes a bottleneck if you have a high-speed fibre connection running into the house.

Overall, this unit was a real stunner, providing more than enough capability to handle the large number of smart devices I have in the house without affecting my day to day networking needs. Online content streamed silky-smooth, free from buffering pauses when watching streaming movies, and no ping-lagging on games was evident either. It was simple to configure - maybe not your average-Joe-User level easy, but I didn't have to refer back to any tech manuals to do some basic tweaking in the QoS engine to prioritise data over media streaming and gaming traffic. I'm not a huge gamer, so that's not what I want the system to dedicate resources to at the cost of downloading work-related files etc. If I am pulling down a 2GB photoshop file from a client, I don't want bandwidth being held in reserve for the gaming console, for example. A great investment, especially for homes with teenagers, who always seem to be on their phones or tablets, chatting to friends on video, or hammering PUBG like a BAWS!

If you like reading books, browsing the Internet, listening to music, and viewing your favorite photo albums or videos, this quick as a flash Android tablet will be your new best friend. Light, portable and easy to use this super-speedy tablet is feature packed to bring you a marvelous multimedia solution. Smartab ST7NZ is a unique multi profile ... more...