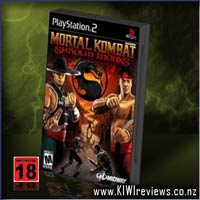 Disclosure StatementFULL DISCLOSURE: A number of units of this product have, at some time, been supplied to KIWIreviews by Gamewizz Digital Entertainment or their agents for the purposes of unbiased, independent reviews. No fee was accepted by KIWIreviews or the reviewers themselves - these are genuine, unpaid consumer reviews.
Available:
at quality software and game retailers

Beginning as either Kung Lao or Liu Kang (each possessing his own unique repertoire of attack styles and fatalities), players will have the ability to interact with a slew of classic Mortal Kombat characters, such as Sub-Zero, Scorpion, Kitana, Goro and many more.

Features
•  First Ever MK Action/Adventure with Multi-Directional Kombat System: Levy attacks in any direction at any time, all the while not losing focus on the primary target (with unique animations and properties for every direction). Experience incredible depth of combat via Strings, Juggles, Special Attacks, Air Combat and Fatalities.
•  Single or Two-player co-op gameplay: Play as Liu Kang or Kung Lao, each with their own unique repertoire of four "Attack Styles" plus Special Attacks, and Fatalities. Unlock additional characters and abilities through various gameplay systems.
•  More Comprehensive Fatalities, New Multalities, Brutalities and Classic Special Attacks:
•  10 to 15 Fatalities per character! With 3 levels of Fatalities, unleash bigger and better versions as your hero progresses.
•  At Level 2 let loose the incredible Multality, a room-clearing wave of destruction destroying multiple enemies at one time.
•  Level 3 allows vicious Brutalities.
•  Weapon Combat: Defeat enemies, recover their weapons and extract revenge on their allies! Find and equip unique weapons from Mortal Kombat classics.
•  Interactive Environments: Melt enemies in acid pits, impale them on spiked ceilings, and hang them from hooks. Combine background interactions with Combat to solve unique action-orientated puzzles. Hurl an enemy into a spiked wall and leap from their impaled body to a higher area!
•  Mortal Kombat Mythology: See the infamous Mortal Kombat Tournament from the eyes of Earthrealm's mightiest combatant Shaolin Monks Liu Kang and Kung Lao.
•  Explore the Outworld in its entirety...revisit the classic Mortal Kombat 1 and 2 stages in 3D! Fight and interact with a slew of classic Mortal Kombat.

Mortal Kombat is a game where you can chose one of two players, one is Liu Kang and the other is Kung Lao, each having their own skills and 'fatality' skills, which are very enjoyable to watch and use. At the start of the game you have your normal skills, but as you go on your skills get upgraded. At the end of each stage you face one of the generals. As you pass each of the warriors, your enemies get stronger and faster. In some of the challengers you have to use your strengths to complete the task to go on to the next task.
Once you have completed the game you can chose two new characters, Sub-Zero or Scorpion and then you can have more fun with their abilities and skills. This makes the game really enoyable, and I got lost when playing, just getting involved in the game and letting time fly past outside. I love these sorts of games and will be playing this one a lot. More late nights are in store I think. It's a great game.

It will be a first-person shooter seen through the eyes of Judge Dredd as he patrols the mean streets of the stunningly realised future metropolis, Mega-City One. Dredd will find himself having to deal with the full spectrum of criminal behaviour, from littering and caffeine abuse to saving the city from the utterly evil Judge ... more...