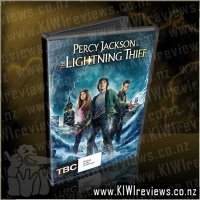 Disclosure StatementFULL DISCLOSURE: A number of units of this product have, at some time, been supplied to KIWIreviews by Roadshow (NZ) Ltd or their agents for the purposes of unbiased, independent reviews. No fee was accepted by KIWIreviews or the reviewers themselves - these are genuine, unpaid consumer reviews.
Available:
June 2010

I've seen "Percy Jackson and the Lightening Thief" twice now, once a little after it came out and again recently due to it airing on TV and knowing that it would be a movie that my son would be interested in. I've never read the Percy Jackson books but I know a good amount of Ancient Creek mythology and this came in handy with my curious son who wanted to know more than just what information the movie was offering us about each perspective character, creature or God and I did indeed have to pause the movie a few times to explain things in a little more detail than was on offer.

The special effects for this film is decent and it is easy to believe what is happening in front of us visually and really caught the kids attention. The plot wasn't anything spectacular, for myself, I knew what was happening, what was going to happen and how we could expect the movie to finish. My eldest had one prediction which he was right about (and pleased with himself for being right) and all three really enjoyed how the movie went. This is a fun family film, nothing too heavy and a good intro to Greek mythology. We'll be watching the second film for sure. This film I watched purely because I had seen the second film, so I thought that I owed it to the franchise to give the original a chance. The only issue is that I already knew who the villain would turn out to be due to the fact that he still ends up being a recurring character. But ignoring that, I thoroughly enjoyed this film.

Having seen some pretty abysmal computer generated creatures lately (such as the ''300'' sequel and the "Legend of Hercules") needless to say, I was apprehensive as to how it would turn out, but it was quite well done. While they were not downright the most realistic looking creatures (pretty difficult to do when you are dealing with mythical creatures), they were not glitchy or laggy; they flowed and moved as a creature would do. Not only were the graphics seamless, the CGI was used to accentuate the environment and characters; NOT to be the centre of attention. This film was able to use computer technology well, while still remembering that it was film and had a story to tell.

Plot-wise, it was rather easy to see what was going on, and the overall outcome was pretty predictable. But I thoroughly enjoyed it nonetheless. It had a good splash of action and some interesting original scenarios that the groups had to work their way through. Some aspects such as overcoming Medusa, and crossing the River Styx were very much as expected, but necessary parts of the mythology.

I reckon that this would have made the film an instant classic, if they had aimed it at mature adults and made it darker (maybe even splitting it into multiple films), as the plot, effects, and characters had the room to expand (especially with a large group of trained demigods involved), but it works well as a quick young adult trilogy. I did enjoy it more than I was otherwise expecting, which is always a pleasant surprise, and I hope to soon see a "Titan's Curse" sequel in production.

Never having read any of the 'Percy Jackson' books, but having enjoyed Rick Riordan's offerings in the 39 Clues series, I wasn't too sure wuite how this was going to pan out. To give me a broader 'user experience' to consider, I sat down with my eldest son so I could gauge his reactions as well.

By half way through, the outcome of the story was pretty evident, however that did nothing to diminish the enjoyment of the movie itself, and the stunning special effects. Yeah sure, we're used to super-realistic special effects now, thanks to such flicks as Avatar, but this was certainly right up there, and had everything it took to make it seamless... Mr Tumnus would have wilted in embarrassment at how smoothly THIS satyr blended into his goat'ish lower half.

With many famous and familiar faces popping up in guises you had to laugh at (I mean, Uma Thurman as Medusa?! Really...) there was also a heavy smattering of fairly new talent who showed themselves off well. Logan Lerman in particular did a fairly good job of the title character... anyone would think we actually was a hyper-active, dyslexic teenaged American. Oh, hang on...

Overall, though the movie had a couple of 'flat spots' that really jarred the pace (a depressive monologue from Charon, the underworld Ferryman, in particular) it was a pretty rollicking ride throughout. I was especially amused and entertained by the more modern spin on the old Greek mythos... in particular, I loved the version of the House of the Lotus Eaters... brilliant! A time-warping Las Vegas Casino... who woulda guessed?! Great family entertainment, perfect for this time of year. Get the heat on, the family in front of the TV, and go Greek!

Score: 7.5
Product reviews for listing 489: Home on the Range
Directed by Disney Classics

When a greedy outlaw schemes to take possession of the 'Patch Of Heaven' dairy farm, three determined cows, a karate-kicking stallion named Buck and a colourful corral of critters join forces to save their home.

The stakes are sky-high as this unlikely animal alliance risk their hides and match wits with a mysterious band of bad guys.