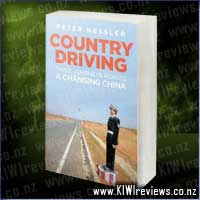 Disclosure StatementFULL DISCLOSURE: A number of units of this product have, at some time, been supplied to KIWIreviews by Text Publishing or their agents for the purposes of unbiased, independent reviews. No fee was accepted by KIWIreviews or the reviewers themselves - these are genuine, unpaid consumer reviews.

Country Driving is Peter Hessler's engaging account of his travels through China over the past decade - from the fortified towns along the Great Wall in the North, to once-remote villages now undergoing massive change, and finally to the entrepreneurial cities of the south-east, where factory start-ups are a dime a dozen.

This is the story of a nation modernising at a great pace, and of ordinary Chinese caught up in that modernisation. With eloquence and wit Hessler takes us on the road less travelled, showing us a China rarely glimpsed by outsiders.

Country Driving is a very readable adventure through remote villages and emerging urban areas in a rapidly changing China. Far more than a scenic ride (not a picture book); this is a journey through the turbulent interface of ancient culture breathing in modern influence.

Told with sensitivity and humour, this story carries us through the dramas of characters we meet along the way with the ease of a TV remote surfing through streams of reality SitComs. But nothing is staged, no-one has a script, and there is no director in sight, only hopeful slogans on countless bill boards. As the personalities emerge, you love them or you don't - either way you feel the changes through their experiences.

Next, Hessler seeks out a 'writer's retreat' in a small farming village called Sancha, where he spends about six years on and off (from his base in Beijing). During which time, of particular note, we meet the idiot, the shitkicker, and the local party secretary (one of the few women in this role); we experience the trials and joys of young Wei Jia growing up; the business endeavours of his father Wei Ziqi; and the helplessness of his increasingly frustrated mother Cao Chunmei as her hopes and dreams are quietly extinguished one after another.

Finally, we are taken south to find a relatively untouched village in the pathway of progress (in the form of a new government-built expressway). Here we watch urban development transforming the village over a period of just over two years. Of all the migrants attracted to the growing town, you have to love the feisty young Tao Yufeng. As Boss Gao remarked "That girl knows how to get things done." I'm sure you will agree when you find out what he meant.

This book was as enjoyable to read as a good novel.

Who holds the seeds to save a sky-high world?

Arborium is at risk, the sharpened blades of rival Maw poised to saw off its bark and branches. What can a poor plumber's apprentice armed with little more than a monkey wrench do to stop the chopping?

Carved into a massive, mile-high canopy, the forest kingdom of Arborium stands upon the tallest of trees. Within them, 14-year-old Ark holds the lowest of jobs: unclogging ... more...