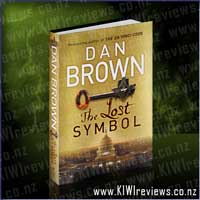 Washington D.C. : Harvard symbologist Robert Langdon is summoned at the last minute to deliver an evening lecture in the Capitol Building. Within moments of his arrival, however, a disturbing object - gruesomely encoded with five symbols - is discovered at the epicentre of the Rotunda. It is, he recognises, an ancient invitation, meant to beckon its recipient towards a long-lost world of hidden esoteric wisdom.

When Langdon's revered mentor, Peter Solomon - philanthropist and prominent mason - is brutally kidnapped, Langdon realizes that his only hope of saving his friend's life is to accept this mysterious summons and follow wherever it leads him.

Langdon finds himself quickly swept behind the facade of America's most powerful city into the unseen chambers, temples and tunnels which exist there. All that was familiar is transformed into a shadowy, clandestine world of an artfully concealed past in which Masonic secrets and never-before-seen revelations seem to be leading him to a single impossible and inconceivable truth.

Expensive to buy new as a hardback but then there is a lot of research put into this book so I think Dan Brown deserves it!
The interesting facts mixed with fiction means it is high on the re-readability scale. The suspense is great. Loads of it to keep you hanging.
Believability is a nine. What's great about Dan Brown's books is that they are so believable that you have to go and search around to see if what he wrote is actually fact or not. In this book there is a huge surprise in the plot that you may or may not find believable (can't say or I would spoil the book!). Either way it was a well kept secret and deserves credit for this.
It's a typical Dan Brown book. Full of amazing facts and mixed up with a great storyline. Great writing. I will buy anything this man writes!

When it comes to secret societies, especially global-spanning one such as the Freemasons, one can only wonder at how much of what is revealed in this book is genuinely true, and how much is twisted to fit the plot. That goes double for anything related to the American government and what dirty secrets are hidden within any/every facet of it's existence and national architecture.

As with The Da Vinci Code, Dan Brown packs a lot of potentially 'secret' information into the plot. Sure, this is a great way to ensure tension and a high-enthrallment factor, but personally I found it amazingly thought provoking this time around, in a way none of his other books have. The concept of Noetic Sciences has been one on my mind a lot, especially after seeing such DVDs as What The Bleep Do We Know and Peaceful Warrior where self realisation and 'mind over matter' is posited as a method of affecting not only ourselves but also the world around us. The aptly-named "Observer Effect" now proposed by Quantum Physics as the base causal effect behind collapsing superpositional "maybe" states into one "is".

Probably the biggest "Oh Wow!" factor of this title for me was the history of American Masonic Symbolism and how it has infiltrated every facet of the American culture, even without it's own people know it. Blows me away how they just don't 'get' their own culture, where it's roots are, etc... and how it takes a sensationalist novel like this to really bring it home. Dan Brown truely is a master of this genre.

As with other Brown titles, there is a lot of suspense... a little too much in places. By the time I was approaching page 400, I was more captivated by the back-plot than the fates of the characters themselves... I know that makes it sound like the book really isn't "all that and a bag of chips" but it really does have so much going for it, on so many levels, that it's going to be a page-turner for any reader, regardless of what exactly it is that has captured them. This was just *my* experience with it.

The characters are indeed well developed, as is to be expected... the plot is entirely self-consistent with plenty of twists and red-herrings to keep you captured, and a lot... I mean a *LOT* of anecdotes and historical background... so much that I plan to read it again ina few months time to refresh it in my head.

Overall... this one is going to be a great book... if you like good writing, go find another author, there are plenty out there. This one is for those who appreciate GREAT writing!

That was very interesting.

From the moment I picked up this book I was pulled into the middle of Washington D.C. to discover hidden symbols and meanings hidden in plain sight. The logic and numerous facts or theories repeatedly matched up and merged to form an illuminating window into the possible future and insane sub-conscious thoughts. A tattooed instigator of chaos turns the world sideways and Robert Langdon yet again solves his way through the mysteries with strong dedication. The mix of American history bases it all with unerring solemnity.

Tattoos, symbolons, alchemy, christianity, all rolled into five hundred pages of interesting reading, though some of the characters seemed at first to have cloned personalities from the previous novels written by Dan Brown, but that soon faded into mind boggling plot twists.

With a large amount of philosophy, science and in small parts what seems magic, the book encompasses many topics and yet one topic alone which makes it a thrilling intelligent story.

Man made God in his own image.

Score: 9.8
Product reviews for listing 2697: The Shallows: How the Internet is Changing the Way We Think, Read and Remember -  Written by Nicholas Carr

In this ground-breaking and compelling book, Nicholas Carr argues that not since Gutenberg invented printing has humanity been exposed to such a mind-altering technology. The Shallows draws on the latest research to show that the Net is literally re-wiring our brains inducing only superficial understanding.

As a consequence there are profound changes in the way we live and communicate, remember and socialise - even in our very ... more...