ProdID: 2364 - The Caves of Steel
Written by Isaac Asimov 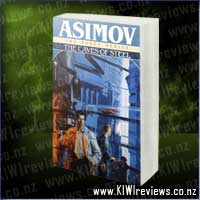 The Caves of Steel product reviews

Isaac Asimov's Robot novels chronicle the unlikely partnership between a New York City detective and a humanoid robot who must learn to work together. Like most people left behind on an over-populated Earth, New York City police detective Elijah Baley had little love for either the arrogant Spacers or their robotic companions. But when a prominent Spacer is murdered under mysterious circumstances, Baley is ordered to the Outer Worlds to help track down the killer.

The relationship between Elijah and his Spacer superiors, who distrusted all Earthmen, was strained from the start. Then he learned that they had assigned him a partner: R. Daneel Olivaw. Worst of all was that the "R" stood for robot - and his positronic partner was made in the image and likeness of the murder victim!

The Caves of Steel was first published in 1958 and remains a great example of 'hard' SciFi - loaded with futuristic yet realistic science and technology, as well as challenging social ideas.

This story is set in the 'city' of New York, some considerable time in the future. But not any kind of city that we know today. This is a semi-autonomous 'Cave of Steel and Concrete'. Able to shield itself; burrow under; lay itself out scientifically; feed itself primarily with increased use of yeasts and hydroponics. It was the culmination of man's mastery over the environment. There were around 800 of these cities on Earth, with an average population of about 10 million. Practically no-one lived outside these cities, most even feared to go outside.

All the work to exploit the outside resources was performed by robots, despised necessities controlled by a few humans at a distance. In earlier times, men had colonised other planets, but that was no longer on the agenda. Strict population control was the only plan now. Everyone has their allocated social level and personal resources, and of course specific permissions to bear (or not to bear) children.

The inhabitants of the fifty-odd colonized planets are known as 'Spacers'. They are rich. Their worlds have low population density, and they rely heavily on robot labour. They are also resented by the Earth dwellers. For some time, one of them has been working on Earth and trying to convince the Earth government to loosen their anti-robot restrictions. One morning, he is discovered with his chest imploded buy an energy weapon. Detective Elijah Baley (Earthman) is tasked with finding the murderer. He is mortified to be teamed with R. Daneel Olivaw, a Spacer Robot so cleverly designed he appears to be a man.

And so we begin a quest that along the way subtly probes human nature and morality. Even challenges the concept of 'overpopulation' of Earth, suggesting indeed we might need to boost the birth rate rather than restrict it - so that we have enough people to sustain a successful push out into space colonization.

Isaac Asimov was one of those brilliant SciFi authors who seamlessly wove into his stories practical science and technology advancements that were many years ahead of his time. He was a prolific writer, contributing significantly to the SciFi genre until his death in 1992 (aged 71). His other most notable works would be the Foundation Series and the Robot series.

Point of Interest:
The Caves of Steel was followed by 'The Naked Sun', in which Eijah Baley is again teamed with R. Daneel Olivaw to investigate another murder - this time on one of the Spacer worlds.

Each workbook contains authentic excerpts from the Geronimo Stilton series. It uses a 3-step format that ... more...