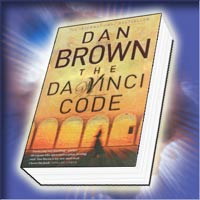 Disclosure StatementFULL DISCLOSURE: A number of units of this product have, at some time, been supplied to KIWIreviews by Penguin Random House or their agents for the purposes of unbiased, independent reviews. No fee was accepted by KIWIreviews or the reviewers themselves - these are genuine, unpaid consumer reviews.
Available:
March 2004

Robert Langdon, Harvard Professor of symbology, receives an urgent late-night call while in Paris: the curator of the Louvre has been murdered. Alongside the body is a series of baffling ciphers.

Langdon and a gifted French cryptologist, Sophie Neveu, are stunned to find a trail that leads to the to the works of Da Vinci - and further. The curator, part of a secret society named the Priory of Sion, may have sacrificed his life to keep secret the location of a vastly important religious relic hidden for centuries.

It appears that the clandestine Vatican-sanctioned Catholic sect Opus Dei has now made its move. Unless Landon and Neveu can decipher the labyrinthine code and quickly assemble the pieces of the puzzle, the Priory's secret - and a stunning historical truth - will be lost forever.

The one word I would use to sum up this fascinating tale of history, secrets and genius would be 'intrigue'.

It's an action packed story of codes and cults that teaches you along the way about new concepts and gripping, intelligent symbolism.

It starts with Robert Langdon, Professor and symbologist suddenly being thrust into a world of complicating cyphers and puzzles that draws him further into a chase for what seems one of the most sought after of historical artefacts, the holy grail.

Having the illustrated edition makes it even more of a thrill-ride with accompanying images of landmarks, maps and paintings, which intensifies the read.

Opus dei, freemasons and christianity. The only bad thing about this book is that it encouraged me to learn and research more of what its about.

Only one of Dan Brown's several great reads.

Until recently, I felt like I was the only person on the entire planet who had not read Dan Brown's The Da Vinci Code, something that has now been rectified. I must say, it has taken far too long to actually get to read it.

What can I say that hasn't already been said? What words could I use to describe this novel? Why has it taken me so long to get to read it?

Brown's novel is the genuine page-turner. Many novels in the past have been called page-turners, but this far outstrips them all. If you want to kill five minutes and have a quick read, DO NOT PICK UP THIS BOOK. Seriously. I sailed way past my bus stop yesterday, and had to get off and walk to work. I was late. Very late. But did I care? Not really, my thought were turning to The Da Vinci Code, and how soon I could get to read it. I stayed up far too late last night, not wanting to put the book down. My daughter can finally eat - I am willing to cook meals again.

Once you pick up this book, you will find it very hard to put down. You would sooner have a leg hacked off than put this book down before you have come to the final page. I am not normally known for reading novels. I rarely read fiction. This is the exception. I was grabbed by the throat on page one, and was taken on a roller-coaster of a ride through America, France, Italy, England and Scotland, until I arrived breathless, tired and hungry nearly six hundred pages later...

If this is fiction, and Dan Brown in just a storyteller, then I could quite happily immerse myself in a fictional world created by Dan Brown - and never leave.

Thoroughly enjoyed this book, Dan Brown is a gifted author!
The only complaint I have about it is that it was paced so quickly the book was over before I knew it!
Some small knowledge of religious artifacts and history will help the reading, and for interests sake, but the author gives you plenty of 'fact' to make sure you know what is going on.
I'd recommend this as a great read, particularly if you like a book you can't put down... just don't forget it's fiction!

I haven't even finished the book and I so impressed I have to write a review now... I simply can not wait to finish it.

Being one to find esoteric connections fascinating, adore secrets unveiled, puzzles solved, enigma's revealed... this book, this awesome story had me totally hoooked by the first chapter!

Packed with twists and turns, puzzles and, most strangely of all, EXPLICITLY FACTUAL information, I am stunned such a book isn't retailing at a far higher price. I would absolutely LOVE to see this made into a movie... The movie based on the book Timeline was gone from the cinema before I could see it, but this book was so much fuller, I doubt a movie would do it justice... but I would still love to see it, the pictures it painted in my mind were so stunning I just have to see them on the big screen. Anyone got a few million they want to invest? :)

I have only just finished chapter 33, and I am overwhelmed by it already. Overall, I just have to say "HELL YES! Buy this, you will not be disappointed." and hope that I can get some of his other works, like Digital Fortress - that sounds way-cool too!

OK, I have now finished the book. It was brilliant! I had a lot of trouble putting it down at any stage, to the point where I sat up til 4am to finish it last night. It was wonderfully tangled web, with connections that we all know about but just don't click to... and there are a few that you really were not aware of in the day-to-day part of your mind.

Full of sideline explainations of the origins of everyday words, and quite a few non-everyday ones too, I loved it to the max... as the score reflects.

Now, more than ever, I am looking forward to reading more of Dan Brown's works... I suspect there will be some parallels between the super-code from Digital Fortress and the oft-maligned PGP. (grin)

Mark reads at high speed. He pauses at a comma, star jumps at an asterisk and leaps at an exclamation mark. He reads and reads until he reaches, a full stop.