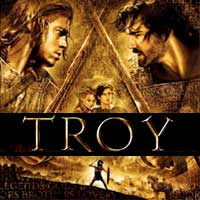 Throughout time, men have waged war. Some for power, some for glory, some for honor ? and some for love.

In ancient Greece, the passion of two of literature's most notorious lovers, Paris, Prince of Troy and Helen, Queen of Sparta, ignites a war that will devastate a civilization. When Paris spirits Helen away from her husband, King Menelaus, it is an insult that cannot be suffered. Familial pride dictates that an affront to Menelaus is an affront to his brother Agamemnon, powerful King of the Mycenaeans, who soon unites all the massive tribes of Greece to steal Helen back from Troy in defense of his brother's honor.

In truth, Agamemnon's pursuit of honor is corrupted by his overwhelming greed - he needs to conquer Troy to seize control of the Aegean, thus ensuring the supremacy of his already vast empire. The walled city, under the leadership of King Priam and defended by mighty Prince Hector, is a citadel that no army has ever been able to breach. One man alone stands as the key to victory or defeat over Troy - Achilles, believed to be the greatest warrior alive.

Arrogant, rebellious and seemingly invincible, Achilles has allegiance to nothing and no one, save his own glory. It is his insatiable hunger for eternal renown that leads him to attack the gates of Troy under Agamemnon's banner - but it will be love that ultimately decides his fate.

Two worlds will go to war for honor and power. Thousands will fall in pursuit of glory. And for love, a nation will burn to the ground.

When I first watched this, it was at home after renting it. And I am glad that I had. I have never been a big fan of Brad Pitt, and at the time, I didn't like anything that Orlando Bloom was in, other than Lord of the Rings. And Helen (Diane Kruger) was not my idea of 'the face that launched 1,00 ships'.

My biggest disappointment was that the Gods didn't feature at least a little bit more in this adaptation. Yes, I understand that the writers, producers etc were aiming for big fight scenes, great imagery etc. etc. But for a story that had a big focus on Gods, I would have liked a small bit more.

All in all, there wasn't too much of anything, but it still had a wooden feeling to the atmosphere for me, and so I couldn't really get myself into it. I did watch it again a couple of years later, when it was on TV, but I still found it to be the same, and just not as good as I would have expected it to be.

Not a movie I would own, nor one I would want to watch again. It was ok for a once off watch, but not more than that.

As I sat in the darkness, watching someone's version of history unfolding, I was waiting for something... I wasn't too sure what, but by the end of the film I realised it still hadn't shown itself. It wasn't until much later I realised that I had been waiting for a lot of things...

I was waiting for the Gods to make an appearance - they hardly even rated a mention, yet they were a prime element in everyday life back then, if the surviving records are anything to go by.

I was waiting for something new - on the heels of the Lord of the Rings trilogy, and with elements of many other such movies making appearances throughout, this whole movie was lacking the X factor, a key requirement in entertainment these days.

I was waiting for some plot elements that had not already been covered by the legends and stories that have made it down to us through the centuries.

As it stood, the movie's only saving graces were it's huge budget, and the sheer scope of the battle as it was laid out in preparation for the actual start of conflict. Even the famous Trojan Horse was portrayed in a far less vital way than it could have.

Overall, I wasn't actually all that impressed. The movie trailer showed this in a far more flattering light, and really covered most of the highlights of this one.

In the year 1750, Joshua and Naomi Collins, with young son Barnabas, set sail from England to start a new life in America, where they build a fishing empire in the coastal Maine town that comes to carry their name: Collinsport. Two decades pass and ... more...