« The Book of God and Physics review

Charles Darwin and the Tree of Life review 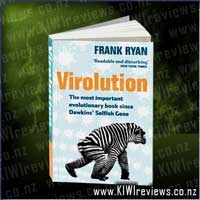 The extraordinary role of viruses in evolution and how this is revolutionising biology and medicine. Darwin's theory of evolution is still the greatest breakthrough in biological science. His explanation of the role of natural selection in driving the evolution of life on earth depended on steady variation of living things over time - but he was unable to explain how this variation occurred. In the 150 years since publication of the Origin of Species, we have discovered three main sources for this variation - mutation, hybridisation and epigenetics.

Then on Sunday, 12th February, 2001 the evidence for perhaps the most extraordinary cause of variation was simultaneously released by two organisations - the code for the entire human genome. Not only was the human genome unbelievably simple (it is only ten times more complicated than a bacteria), but embedded in the code were large fragments that were derived from viruses - fragments that were vital to evolution of all organisms and the evidence for a fourth and vital source of variation - viruses. Virolution is the product of Dr Frank Ryan's decade of research at the frontiers of this new science - now called viral symbiosis - and the amazing revolution that it has had in these few years.

As scientists begin to look for evidence of viral involvement in more and more processes, they have discovered that they are vital in nearly every case. And with this understanding comes the possibility of manipulating the role of the viruses to help fight a huge range of diseases.

When we hear the word 'virus' we are immediately filled with negative connotations. Computer viruses (or virii, to be more technically correct) attack our PCs and steal or damage important data, while organic virii attack our immune systems and cause illness and possibly even death. However, very few of us are aware that the main purpose of a virus is simply to inject a piece of DNA into the genome of another organism. Like any other things that have shaped our evolution, from the discovery of fire to the taming of electricity, this can have positive and negative effects, depending on the circumstances. As one of Dan Brown's characters said in The Lost Symbol, "The guardian angel of one side is seen as a destroying demon by the other".

Virus involvement in evolution has been pretty much ignored until fairly recently, when their impact and inclusion in the genome of a large number of species has been confirmed, in the form of Endogenous Virus code. Basically, you could think of it like this: The genome is a sequence of basic instructional building blocks. The vitrus comes along and inserts all or part of itself into the genome, thus becoming part of the instruction set when the organism replicates. The offspring now have a new feature, be it positive or negative... an internally-induced mutation if you will. The benefits or penalties of the mutation will become evident over time, and those for whom it serves some beneficial effect will continue to propagate, and those for whom the results are unstable, unpleasant or just plain unfortunate, will fail to reproduce and die off within a generation or two. Darwinian selection in action on another scale.

Human Endogenous RetroVirii, or HIRVs, have been known about for quite a while but no-one has really explored their possible effects on the early evolution of humanity, and other species by correlation. This struck me as amazingly strange, since anything that affects the DNA will affect the genetic evolution of the offspring - it could hardly be otherwise. If you alter a knitting pattern, you suddenly end up with a third sleeve, no neck, or a different pattern... you can't expect to change the instructions without affecting the results... and yet, science blinded itself for many years to this obvious fact, because it didn't 'feel right' the the pack leaders.

Overall, though this title may be hard reading for many, it is an interesting insight into the author's discoveries, journeys, conversations and inspirations relating to this fledgling field of research. It is written in a first-person narrative style that makes it a come across as a cross between a diary and a lecture, for me. I found it very accessible, and a fascinating read. Though I have a historical interest in the biological sciences, genetics and microphagic studies, I still found a lot of new information, and the historical narrative was fascinating to read, showing, as it did, that an off-handed comment at the right time to the right receptive mind can open whole new avenues of research.

The Moon? That didn't seem right to Morgan. No one was called 'The.'

This is the story of Morgan's quest to learn the name of the Moon.