« The Whispers of Wilderwood Hall review 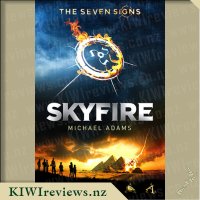 Enter the DARE awards... make your dreams come true! The seven winners of the inaugural DARE awards are thrust together on a life-changing journey, to cross seven continents in seven days. But on the eve of their adventure, they receive The First Sign.

Before they can solve the puzzle of the mysterious symbols, a deadly attack throws one of them into a terrifying fight for life. Soon, all seven are battling an epic seven-day countdown to destruction. Can they stand together and solve The Seven Signs before their time is up? Seven teenagers. Seven signs. Seven days to save the world!

From the first page I was hooked, turning pages frantically to find out what would happen next. It had adventure, mystery and intrigue and as the story evolved a lot of questions were being asked, mainly by me. But unfortunately the pace dwindled for a period and my interest dropped slightly so what should of been a day read ended up taking me three days. The chapters are nice and short and the writing style is great and is simple to understand. Teenagers of all ages should enjoy.

Although, there were periods where I did get a tad frustrated with it. The clues were extremely simple to decipher and for a group of gifted children I am amazed they could not break the code. As soon as I saw the letters I knew instantly what it represented. Not only that but that maturity levels show thru with debating on whether to get parent assistance then jumping to conclusions, it just got a bit silly but then I guess it is aimed at children. Then the chase scene with Yasmin on the motorbike was doing my head in as the realism of it all seemed to float away.

Don't get me wrong I did enjoy the book and I am keen to read the next installment and I am dying to find out if the Signmaker is who I assume it is and for the real reason behind it all. It has enough layers to the story that is compelling enough to keep me entertained and I will just have to ignore the age thing. Actually I can already see this as being made into a movie series as it has all the elements required to be a massive hit.

I appreciated how each chapter revealed who was involved in the chapter and where the location was so that you didn't get completely lost as with a cast of seven children spread all around the world it could get a bit confusing. The kids are all easy to gel with and at this stage I have not got my favourite story line as not enough has been revealed about them all. It is also nice that we get to visit each others countries where things are not always what they seem and new plot lines are opened.

On the front cover it does tell you that you can win prizes and on the insert of the cover tells you to look at a website but unfortunately the competition finished in January 2016. But the other great part is the second segment of this series is due out in November of this year so hopefully should be out now. Definitely a series I will be keeping my eyes on.

The opening sequence of this book had me hooked straight away. I like the way it launches immediately into heavy duty action, engaging the reader so that there is a foreshadowing of what is to come later in the book. The story then moves to a flashback and most of the story fills in the background to this opening, leading to the events that caused it to happen.

News reports, internet quotes, informative graphics, and geocaching references help to flesh out each step of the plot. The hieroglyphics which accompany the text clues appear to be based on authentic originals; Yasmin identifies hers as a representation of Khufu who built the Great Pyramid at Giza. This would imply that the author has done his research in establishing the background to the geographical and historical references in the book.

There are ostensibly seven protagonists in the story, all drawn from different parts of the world to enter the DARE awards. In fact, they are unevenly presented. Dylan, Andy, and particularly Yasmin, have a much greater role than the other four, who tend to be forgotten for the most part. I found myself wondering why it was necessary to have seven main characters when the story could have concentrated on just three or four. Possibly the plan is to feature the lesser characters to a greater extent in a sequel because the book is planned to extend to seven volumes.

Although I enjoyed the book on the whole, I was highly disappointed in the ending. It finishes on a cliff-hanger and to find out what happens next, you have to wait till the next volume is available for purchase. This annoys me on several levels. Even if a book forms part of a series and features the same set of characters, it should be complete in itself. Then a reader is not disadvantaged if she or he is unable to get Volume 2. The volumes in nearly all the series I have read have been issued as stand-alones, and even if there may be a little confusion over who is who if you start reading part way through that series, the volume itself has a beginning and an ending. There was no indication when I started reading that I was going to be reading only the first part of a story. For me, this spoiled what was otherwise an enjoyable read.

I think, if the author plans to present a series in this way, it should be clearly indicated at the start that the reader needs to read ALL the volumes in sequence so that the whole story is revealed. Further, I think the entire set should be published at one time so that a person who is really keen can get them all in one go and have a binge read if that is their preference.

Slide and Find Trucks. Behind sliding panels you will find all sorts of trucks... can you guess which?