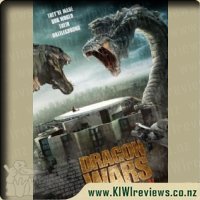 This is a movie that on the cover looks good, but once on it ain't so good.

The good - The creature effects. All of the creatures were really well done, their movements were realistic enough for creatures that aren't real and they meld into the other imagery well, to be honest, the special effects are the ONLY good thing about this movie. The dragons are simply amazing, they're huge, really well done and they are freaky enough that you would never want to meet one of these dragons in real life.

Now, the bad things - Well, in short, the acting. Not a single one of the characters is even *close* to believable and there I had no desire to see any of the characters actually survive, the one I came closest to liking is about to be sent to a mental institution as no one believes that he saw a dragon. The entire story is full of plot holes from beginning to finish and this is probably one of the most cliched, in a really really bad way, movies that I have ever seen. The dialogue seems like it was cut and pasted from a dozen other movies.

The concept behind this was really good but fails miserably.

Based on the 60's-era cartoon of the same name. Royal Canadian Mountie Dudley Do-right is busy keeping the peace in his small mountain town when his old rival, Snidely Whiplash, comes up with a plot to buy all the property in town, then start a phony gold rush by seeding the river with nuggets. Can this well-meaning (though completely incompetent) Mountie stop Whiplash's evil plan?