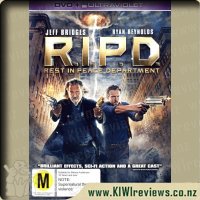 I had never heard of this film, before finding it amongst my flatmates movie collection, but I gave it a view. Within the first few minutes, I contemplated turning it off, as the first thing I see is an incredibly computer generated (not a chance that this looks even the slightest bit real) obese monster defying physics. But as the character reminded me of a "Heavy" from the "Team Fortress 2" game franchise, I decided to watch it through.

It very much has a "Men in Black" feel to it, with just switching out Aliens, and replacing it with dead people (yes, there may be a dead people invasion on the cards), but the plot itself, was pretty reasonable. The main plot follows a department of dead cops that are put back to work to try maintain balance by capturing people that have died, but aren't...you know...dying. It worked well as a comedy, coming up with wacky solutions to many of the questions that one would have in such a scenario (Why does noone recognise these dead hero cops? How do you find a dead person? How do you test if someone is alive? If you're dead...can you be killed?).

It certainly gets a bit far-fetched, and there are many points in the film where you know what is going on and get exasperated that the "cops" aren't aware of it, but overall it was an enjoyable film. I will admit it took a while to get over the horrible CGI, but overall, it probably worked to the films advantage considering the comedic value. Would I watch it again? I probably would. Would I talk about the film with friends? Definitely.

Ryan Reynolds plays Nick, a recently murdered (by his partner) police officer for Boston's finest. He ends up heading towards judgement and then gets swooped up by the R.I.P.D. (Rest in Peace Department) who offer him a good word with Judgement in return for 100 years service, to which he agrees. He then gets teamed up with Roy and they set out to return the deados (dead people who manage to stay on Earth) and at the same time find out a plot to release all those in hell onto Earth.

The special effects in this are pretty good, but there are a couple of times when it doesn't look quite complete and looks a bit too plasticy. I did rather like the transformations from looking like an ordinary human to a deado but with our main bad guy it looked a little too fake once he had transformed into a deado, so that could have been done far better in my opinion.

There were some good jokes and one-liners. The ongoing joke being that to everyone else Nick is a short, old, asian man hanging out with Roy who looks like a busty blond woman. One of my favourite parts is when a man approaches Roy, giving him a 'you could be a model' line and Roy replies as such - "Excuse me? I'm not a piece of meat put on this earth for your gratification, I'm a woman. Respect me or I will castrate you like a three-year-old steer."

This wasn't a perfect film but my husband and I really enjoyed it and may well end up buying it on special one day.

Peter Pan (Williams) has grown up to be a cut-throat merger and acquisitions lawyer, and is married to Wendy's granddaughter. Captain Hook (Hoffman) kidnaps his children, and Peter returns to Never Land with Tinkerbell (Roberts). With the help of her and the Lost Boys, he must remember how to be Peter Pan again in order to save his children by battling with Captain Hook once again.