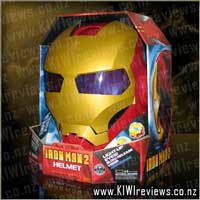 Disclosure StatementFULL DISCLOSURE: A number of units of this product have, at some time, been supplied to KIWIreviews by Hasbro (NZ) or their agents for the purposes of unbiased, independent reviews. No fee was accepted by KIWIreviews or the reviewers themselves - these are genuine, unpaid consumer reviews.
Available:
at selected retailers

Gear up just like the mighty metal-clad warrior with this awesome Iron Man Helmet accessory! Press the button to activate your slow-release visor and make it slide into place so you're ready for action.

Activate your light-up eyes so your enemies can see you mean business and choose one of three different modes to head into battle. Press the Quick Missions button to hear the Iron Man character say cool movie phrases like "Target engaged!" and "I am Iron Man!"

Your Battle Sounds button features power-up, flight and combat sounds and, when you're ready to 'fly' into the heat of conflict, press the Combat Missions button to activate a mission from the Jarvis character. The world needs a hero - and you're just in time!

Cool helmet accessory with three different modes features exciting mission phrases, battle sounds, light-up eyes and a slow-release visor that slides into place with the touch of a button!

I gave this one a test drive by proxy, by watching my 9 year old nephew play with it. He has seen the latest movie and was able to remind me of the two scenes in it where a young boy is wearing one of these. I had to laugh at the cheesy product placement but this showed how effective such placement can be. His eyes lit up and the first thing out of his mouth was a exclaimation about "being just like that boy in the movie". Kids remembered the darnedest things.
The helmet itself was fairly easy to remove from the packaging. This is a really nice new trend from Hasbro, who had an old habit of nearly welding everything into place with those wire ties and plastic ziplocks, and tape, and anything else you could imagine. By contrast this one came out of the box so easily the lad was able to do it himself without adult help.
The helmet is basically three pieces: The face, the back of the head, and the head straps. Assembly was a little tricky though with the headstraps insert being all too easy to clip in back to front. Not too difficult to fix though so just be aware that the higher strap goes to the front of the face, not the back. Attaching the back of the head was a breeze.
Play was very kid-driven, with the helmet making the usual movie-scene clips, some weapons noises, a few jet plane noises, and that's about it. All very relevant to the plot of any Iron Man adventure. What I found a little disappointing though was that unlike many other 'movie character helmets' by Hasbro, this one had no voice-changer. Instead it had a spring-release to lower the front panel of the face mask down, with sound effects. As my young "test pilot" put it, "This is a bit lamer than the Bumblebee one I got for my birthday last year, Unk." Perhaps a little less than diplomatic, but then show me a 9 year old who is.
All in all, I was still pretty impressed by the authentic look and sturdy construction. Though the helmet is in no way a safety device, it did prevent a few bumps as doorways jumped out and attacked him while he "flew around" blasting bad robots with his torch. It was great that it came supplied with batteries and after much playing we both agreed that it was better on "Try Me" mode instead of full "Play" mode, because the clips are shorter and with less "Powering down and beginning diagnostics" which Iron Man would certainly NOT allow every 20 seconds! I wouldn't say it's a great price, but if you get it on a 20% off special at The Warehouse some time it would be a safe bet as a present I think.