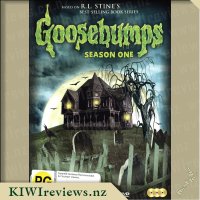 Goosebumps - Season One is an American 1995 kids and family series of horror stories presented on DVD.

From the New York Times Best-selling Author R.L. Stine comes Goosebumps, Season 1, a collection of wildly popular and incredibly zany children's horror stories from the internationally renowned books (of the same name) for the first time on DVD in Australia and New Zealand.

Browsing on Netflix and I came across this, oh what a blast from the past this was, decided to watch the first episode and when the opening credit music played... I felt like a kid again! My eldest was itching to watch this, so once I ascertained that it wasn't too spooky or over the top I let the kids watch and they have been hooked ever since. Compared to some of the shows that the family has watched these are light horror (though one child did jump a few times during one episode) and there is no gore, compared to kids shows today this is very light.

One thing I have really liked rewatching this series is the gender balance, although the "bad guys" are still all males, when it comes to the lead characters it's pretty even in being a female lead one episode, male lead the next and a few combinations thrown in throughout and the girls get into just as much trouble and danger as the boys, bring back a kids show like this please! Whilst I don't think I have seen any of these child actors since, there was one very recognizable even at that young age, Ryan Gosling!!

The kids are hooked, it provides the scares without actually scaring them, it's cheesy but doesn't feel too over the top and a great gender balance. The kids are already onto season two.

As young girl, Nessa Stein witnessed the assassination of her father by the armed wing of the Palestinian Liberation Organisation. Now in her late thirties, Nessa is at the forefront of the Middle East peace process. Ennobled for her campaigning work, the newly made Baroness must fight forces that are conspiring against her as she awards a highly lucrative contract to a Palestinian businessman.

When he is subsequently killed, Nessa ... more...