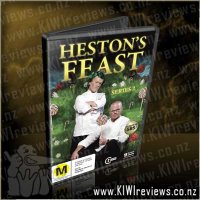 Disclosure StatementFULL DISCLOSURE: A number of units of this product have, at some time, been supplied to KIWIreviews by Roadshow (NZ) Ltd or their agents for the purposes of unbiased, independent reviews. No fee was accepted by KIWIreviews or the reviewers themselves - these are genuine, unpaid consumer reviews.
Available:
March 2011

Among the lavish banquets Heston prepares this time are a Willie Wonka feast inspired by Roald Dahl's famous Charlie and the Chocolate Factory. He also conjures up a Fairytale Feast inspired by the stories which thrilled and scared him as a child, including Snow White, Cinderella and Hansel & Gretel. And Heston goes ghoulish in an eye-popping Gothic Feast that takes inspiration from iconic works of horror such as Frankenstein, Dracula & Dr Jekyll and Mr Hyde.

The culmination of each of Heston's culinary quests is a spectacular banquet laid on for an excited bunch of celebrity diners.

Okay, I have 7 words for you: A-W-E-S-O-M-E, ok that's one word, 7 letters. "Heston's Feast" is a great DVD that I was busting to watch since I saw my Dad watching it in the kitchen. I loved the background music of the main menu for the fact that it really caught my attention and made me want to watch every single episode in series 2.

I thought the fairytale feast and the ultimate feast were a little gruesome at one point, like in the fairytale feast, Heston made a course inspired by "Jack and the Beanstalk, and the "beans" were really chicken's balls, and in the ultimate feast the first course was meat fruit, and the plums were made from Bull's Bollicks! That's more gruesome than the Gothic Horror feast!

My favourite feast was the "Gothic Horror", it was truly horrific! I liked the first course, the "Dr Jekyll & Mr Hyde" inspired cocktail, and it inspired me to look further into that gruesome story. I also found the "Frankenstein's Monster" main course awesome, I was horrified when I found out that the guests were going to be eating REAL brains!

The ultimate feast was not as good as all the other episodes, It seemed slightly boring, but it still had a good "twist" to modern-day food; and with the dessert, it taught me that there is actually a Roman god with a giant penis! The 1980 feast was great, it was wild and wacky with a cool weightless dessert that was almost unreal.

I reckon that "Heston's Feast: series 2" would be good for people over 10 years old, after all, I'm 10 and found this product great, it barely had any violence or inappropriate language in it. If you think you know a great deal about cooking, than this will show you how far you can take your culinary skills, so throw away your cookbooks and say hello to Heston, the culinary wizard of the century!

Riddle: When is food no longer food? Answer: When it becomes a surreal spectacle that looks nothing like food, tastes amazing, and delights as much as it satisfies. Or a shorter version: When it's a Heston's Feast. This series, like the first before it, highlights the fact that food doesn't need to be boring... it doesn't even need to look anything like it tastes... and that none of these ideas are new, just modernised or made practical by modern methods and equipment.

Heston takes mythical foods and makes them real... maybe not quite as first imagined, but as close as you can imagine. My particular favourite had to be the Willy Wonka inspired feast... if for no other reason than the lickable wallpaper he created. It was so very clever, making edible flocking to stick on the wallpaper, so that the diners were able to get the flavours they expected... pineapple, tomato soup, etc. Amazing stuff!

Now, though this series shows you, in detail, how he made each of the amazing dishes, this is not some do-it-yourself cooking show. Heston makes use of some very advanced equipment that the average home chef could never dream of getting close to... high-pressure spray-dryers, vacuum cabinets, cookers that are accurate to a tenth of a degree, bulk quantities of dry ice and liquid nitrogen... so most, but not all, of the dishes are well beyond the scope of 'whipped this up for tonight's dinner party'. There are some dishes, however, that are within the bounds of possible, if you get a little creative... I leave it to you to decide which ones you think you can pull off... and if you do, please send in some photos - we'd be so impressed to see them!

Overall, there is more than 5 hours of viewing here, spread across 7 feasts and a biography of Heston. More than enough imagination come true for everyone. Some of the feasts are surreal... some are simply spectacular... all are works of art and the culmination of months of preparation, research and development. For the gastronome in your house, this is a winner for winter viewing and sure to inspire any chef-at-heart to push their culinary boundaries a little further.

15 years of research. 2 years of equipment design. 3 years of filming. 1 film to restore your sense of wonder.

A feature documentary covering a day in the life of the bug universe, Microcosmos is an entertaining, visually stunning treat.

Microcosmos chronicles one day in the lives of the many insects living in a French meadow. Extraordinary technology brings us up close to these tiny creatures, ... more...