The Magicians of Caprona review 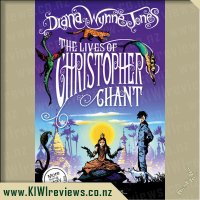 Discovering that he has nine lives and is destined to be the next 'Chrestomanci' is not part of Christopher's plans for the future: he'd much rather play cricket and wander around his secret dream worlds. But he soon finds that destiny is difficult to avoid, and that having more than the usual number of lives is pretty inconvenient -- especially when you lose them as easily as he does! Then an evil smuggler, known only as The Wraith, threatens the ways of the worlds and forces Christopher to take action!

The order of these books is a bit up in the air, this was not the second book written yet chronologically this is the second book in the series but the great thing about these books is that you don't really need to read them in the order that Christopher Chant lives it, you can read it in the order that they were released in without fear of getting horribly confused. In this book Christopher knows his future and where he is heading but he has grown to be a self absorbed child who doesn't care about much more than cricket and just wants to spend time in his dreams.

Everything in this world that Diana Wynne Jones is so convincing and there is little to no explanations about the way that the magic works or the different worlds and this in itself is wonderful because there is simply no need for it to be done in this book. This is the coming of age story of Christopher, he learns more things about himself and his world and just where his place in it all is. You can read these in the order that Wikipedia suggests or the release date, I would highly suggest the latter but it really doesn't matter which way you pick, this is still a fun read no matter what.

When an entertainer dressed as a big cuddly bear arrives at a fancy dress party, the children are delighted. They hoot with laughter as he drinks water from a vase, goes wild on his skateboard and bursts all the balloons. So, after a fond farewell at the end of the day, everyone is surprised when another entertainer turns up, full of apologies for being late!