« The Twelve Days of Christmas review

My Name's Not Friday review 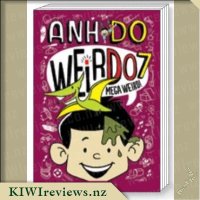 Another adventure with Weir and his family, starting out with a junk clean out and yard sale.

My son loves the Weirdo series. I think part of the attraction is that there are very few words compared to other chapter books - he's a good reader but he's also lazy and sees these books as any easy read. In saying that he does enjoy the content and in particular the humour which always has him laughing out loud. This is book 7 in the series and Weir finds himself helping to get things ready for the street garage sale and helping Bella write a song for a writing contest.

Unfortunately I found this book to be quite boring compared to the other books in the series. The pacing is very slow and it wasn't nearly as funny as some of the earlier books even with the inclusion of a few dinosaur jokes. My son enjoyed it but I don't think it'll become one of his favourites. The highlight for him was a silly song about animal poo - you can never go wrong with toilet humour when it comes to kids books.

There are plenty of black and white illustrations throughout and the chapters are fairly short - we read it in a single sitting. It would be helpful to have read the other books in the series before picking this one up but not completely necessary as it can be read as a stand alone.

The next book looks promising and will hopefully have more of the comedy and characters that we know and love.

We were really excited to get this new book by Anh Do . We have been following Weir Do for a while now, and it is always a very entertaining story when Weir and his family are involved. I first read this book for Miss 9. She was so excited, she was jumping about on her bed to see this book! We got straight into it, and she loved pouring over all the illustrations.

A few times, she would stop me, so she could read something aloud herself, which was amazing. She is not a huge reader, but she really enjoyed reading this book. I guess because the pages are laid out with good sized font and lots of white space, so it's easier to read along. She also loves Weir's pets and thinks Blockhead is so funny. So anything that involves him she wants to re-read over and over again.

One thing in this book, is a song about animal poo. Recently we were at a bookshop and noticed that Anh Do has a picture book out with almost the same song! The one in the picture book is longer, but it was really cool finding it. I remember thinking as we were reading it, that it would make an awesome picture book. So very clever to break it out into one. The song itself was brilliant, very funny if toilet humour is your thing. I know for my kids, it is totally their thing!

There are also some neat dinosaur jokes in this book. One in particular almost broke my daughter. She could barely breath after I told it. She then told the joke to her dad, but couldn't get the punchline out without collapsing in laughter. The next day, after school she told me that she told the joke at school and no one laughed. She was a bit upset about that, so I asked "did you manage to get the punchline out without laughing?" She said no, she can never tell the joke without choking with laughter herself. I suggested the kids didn't really hear the joke then. When she told her Nana the joke, she didn't get it because it's partly related to spelling you have to know going into it. Poor kid, at least she and I laughed.

I tried reading this to Miss four but she was not as interested in the story. I'm not sure why not, as she has previously enjoyed Weir Do books as much as her sister. In any case, primary school aged kids will definitely enjoy this book.

Twelve-year-old Artemis Fowl is a millionaire, a genius-and, above all, a criminal mastermind. But even Artemis doesn't know what he's taken on when he kidnaps a fairy, Captain Holly Short of the LEPrecon Unit. These aren't the fairies of bedtime stories; these fairies are armed and dangerous.
Artemis thinks he has them right where he wants themâ¦but then they stop playing by the rules.