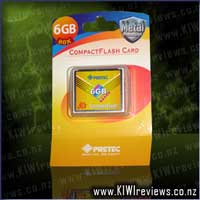 Disclosure StatementFULL DISCLOSURE: A number of units of this product have, at some time, been supplied to KIWIreviews by Verbatim or their agents for the purposes of unbiased, independent reviews. No fee was accepted by KIWIreviews or the reviewers themselves - these are genuine, unpaid consumer reviews.
Available:
at quality retailers

Being a digital photographer, and so far only being used to using nothing bigger than 1GB cards, I was damn near drooling at the thought of getting my hands on a 6GB card!!! Finally I could get fully into shooting in RAW mode, something I had avoided simply because I tend to take a LOT of photos, and trying to do that on RAW, with a 1GB card, really hampers the shots I could take.
So into the Nikon D70 the card went, and off I went in search of possible shots. With a capacity of OVER 1000 photos while on RAW mode (usually I get about 180 on a 1GB), I was able to go completely mad with the camera, and still end up with big beautiful photos that allowed for the extra manipulation by using RAW mode.
Ok... already seriously loving this card!!!
When I'd finally worn out my shutter finger for the day, it was back home to the laptop to test the speed of this card's download abilities. Into the cardreader and start downloading 500+ photos (I DID say I'd gone mad with it!!)... roughly about 10 minutes later, the photos were all sitting pretty on the laptop, and in less time than I'd expected. Sticking the card back into the camera, I decided to check out the buffer speed side of things... and it was here that I found there wasn't much of a difference between the Pretec and the previous 1GB cards I'd been used to. Yes, it was slightly faster... but only barely.
The metal casing of this card was also a bonus, making it sturdier than the other cards I'd used, meaning I felt a bit more comfortable if I did the stupid thing and accidently dropped the card.
Overall... if you're after size, this is definitely a card worth having in a photographer's kit; if you're after speed then there are better cards out there, such as the San Disk Extreme III, but this would still do a reasonable job in that area as well.

Introducing MX Keys - the key to mastering your next big project. It's the first-ever MX keyboard - designed for creatives and engineered for coders. If you can think it, you can master it.