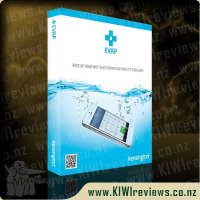 Disclosure StatementFULL DISCLOSURE: A number of units of this product have, at some time, been supplied to KIWIreviews by Kensington or their agents for the purposes of unbiased, independent reviews. No fee was accepted by KIWIreviews or the reviewers themselves - these are genuine, unpaid consumer reviews.
Available:
at selected quality retailers

Studies show that 2 of 3 people will get their smartphone wet. For a fraction of that cost, you can rescue your wet electronics with the Kensington EVAP kit. EVAP contains a unique drying agent that safely removes the moisture from sensitive electronics preventing damage while restoring use -- fast!

There are no current solutions that are 100% effective. Change the outcome of your next accident with EVAP, engineering new outcomes for tomorrow's water accidents. EVAP is fast and effective and even tells you when the device is dry so you're not without your phone longer than needed.

EVAP contains a unique drying agent that removes the moisture from sensitive electronics and prevents damage. The EVAP pouch even tells you when it's time to open the pouch!

No matter how careful you are with your Smartphone, sooner or later, there's probably going to be an expensive accident. In fact, studies show that 2 of 3 people will get their Smartphone wet. For a fraction of the cost of a replacement Smartphone, and without the associated hassle, you can rescue a wet Smartphone with the EVAP Wet Electronic Rescue Pouch by Kensington.

No remedy is 100% effective, but EVAP gives you the best chance of rescuing your wet electronics. Beware of adding additional moisture to your device by using rice or exposing batteries to high temperatures by placing on or in artificial heat sources. EVAP is also great for devices subjected to environments of high humidity & moisture.

A friend of mine was talking about the fact she had dropped her iPhone in water and that she had managed to get it out quickly but it still had some water on it. The phone seemed fine to start with but soon developed some water showing through the front of the screen. She continued to use it. I knew that there was a Kensington EVAP Wet Electronic Rescue Pouch available for review through KIWIreviews so I quickly arranged to get it to test it out.

When I got the kit, I was surprised at how simple it was (especially considering the price of it). It was a white zip lock bag with a little window in it and inside there was a silver packet which contained two little cells of beads (like the desiccant packets you get in a new shoe box). I figured that it is something you could probably replicate simply enough at home (as long as you had the foresight to save the little packets from new shoes etc). The fact that it is a pack that is ready to go could be useful if you needed to find something that would work without too much thought. The downside is that the product is rather expensive to buy and also, people are unlikely to have a kit like this standing by at home just in case they get water in their phone. Inevitably there will be a delay in getting the device into the bag, which is not ideal.

The phone had to be turned off when it was put into the bag and we removed the sim card as well. This of course put the phone out of action for the rest of the day (requiring up to 24 hours) and made it difficult for my friend to carry on with her normal work tasks. She didn't notice the front of the bag changing colour (as it was supposed to do) and she took the phone out after about 10 hours. The water that had been showing on the front of the phone was no longer there and she began to use the phone again with success. The product had obviously managed to absorb the visible moisture. I guess the final result of the test will be whether the phone fails as time goes by.

On the Kensington website, it mentions that using rice to dry out electronic devices can add further moisture. Up to now, that is an option that I would have chosen and one that my friend had tried prior to using the EVAP Wet Electronic Rescue Pouch. In fact, I have just read on one site that rice doesn't absorb moisture until it is heated to 156 degrees Fahrenheit (68.88 degrees Celsius). I found this very interesting to add to my fact bank in my head.

From working in the IT industry for years, I know how important it is to dry electronics out quickly if they get wet. It is also vital to turn them off as soon as moisture comes into contact with the equipment. Failure to do so can mean that the device shorts out. Obviously, most people don't know that and this is how I came to be helping my friend with her phone. The thing is that we can only act based on knowledge that we have been given.

Although some people might find this product useful as it is a no think solution, however, I think that I will just collect some of the desiccant packets and give that a go if I am in a position to need to dry out my phone.

Having had to try and recover a damp phone by doing the whole "seal it in a bag of dry rice for 3-4 days... and pray" technique, a high-tech solution - especially one that didn't waste potential food or kids-arts-and-crafts raw materials - was certainly something I was willing to try... but did I want to put my phone at risk? Heck no! Thankfully, I knew someone who could lend me an old GSM phone that used to run only on the long-defunct 025 network. Still powers up, utterly useless for anything else but this test.

Best bit... he was able to give me THREE identical units, so I could do old-style, new-style and no-style tests.

So... charged them up, dropped them in a bucket of water for 30 seconds, gave a quick swirl then pulled them out to drip-dry, then removed the batteries and back plates. Unit one - new style: Grabbed the bits for one complete phone and dropped them all individually in the bag with a moisture-sucker sachet... and waited. Unit 2 went into rice, and unit three just sat on the test bench in the garage. 3 days later and I figured that was enough time, so prepared them for testing!

All three phones - even the no-style unit - powered up just fine. Right, time to go all Mythbusters on these phones! Enter bucket, stage left! Hark, what water through yonder doorway comes... it's dunkin' time! Throwing all three phones back in to soak, I departed, intending to return in 10 minutes. I got sidetracked and remembered them half an hour later. -eek- Ahh well... back into the testing positions - EVAP, rice and air...

3 days later, and after reassembly... The air-dry phone was refusing to awaken. Calling it, nurse... dead. The unit I packed in dry rice... powered up for about an hour, then died. It also showed signs of damage to the LCD display, with blotches of strange colours around the edges, as though some of the display on each layer had shorted out. After it powered down, nothing I did would get it to reawaken. Another one bites the dust. The phone that was packed in the EVAP bag... still running now, nearly 4 days later. OK, yes, it's had to get recharged, and the recharge time is a little longer than it used to be, with the battery life slightly reduced... but that's a small price to pay for a phone that DOES in fact still function.

Could I test the full functionality of this old phone? No... with no network it can connect to, there wasn't a way to really give it much of a function WoF... and it's just NOT going to happen that I send my smartphone for a swim as a test... but based on the testing I could do, it seems highly likely that if you get to it quick, and get as much moisture dealt with before you bag it... your phone may indeed be saved.

On the flip-side, to be totally honest... this is one of those things in life that fall into the "Have it and hope you never need it" category, like travel insurance and car airbags... You'll soon regret not having them if you ever need them, but you really don't want to ever need them in the first place. Is $30 going to give you peace of mind? Quite possibly... but a bit of paranoia and some common sense around water will prevent you from needing this, and the rice trick seems to be just as viable if it's a short dunk with minimal moisture penetration.

Overall, for a 1-shot wonder, the price is too high. Simply and bluntly. I would pay $10 for this, tops. Sure, you can argue "How do you justify NOT paying it to protect a multi-hundred dollar smartphone?!" Simple... I spend that money on a waterproof pouch or rainproof case/cover! This is a great idea, but sorry, just too highly priced to be fully justified in today's market.