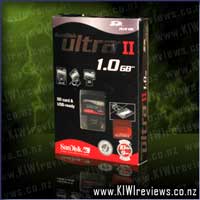 SanDisk's newest addition is the innovative Ultra II SD Plus USB, which combines USB and SD functionality in a single card. The ubiquity of this new format eliminates the need for a reader or PC card adapter, as it transforms from an SD card to a USB adapter with our unique hinged cover.
The superior value for providing two products in one makes this the most unique SD card in the market. Available in 512 MB, 1 GB and 2 GB capacities.

Even after seeing this little card being demonstrated, I was really hestitant to 'snap' it and convert it from SD to USB mode the first time... after all, it just doesn't feel right to grab a memory card and break it in half, even if it IS designed to do just that! I shouldn't have worried...

When I got this card home, of course I dived in and ripped it out of it's protective wrapper, dead keen to give it a trial run. To start with, the card comes packed in USB mode, so you have to flip the fold-away half back into place and clip it onto the nose of the USB plug-stub. This can be a little nerve-wracking for novices, like me... I nearly died when I heard the sharp -snap- of it clicking into place, I thought I had snapped the plug off!

Once it had transformed back into SD card mode, I slapped it into the digicam and went a little snap-happy. Because I snap at 5 megapixel and medium jpeg compression settings, the images average about 1.2mb each, meaning this card could easily hold around 700 images. I got close, with 624 before the light was gone and the batteries were too flat to spark the flash any more. Now when you consider that this card is rated to accept info at a rate of around 9mb per second, you can see that a 1.2meg image wouldn't even register... and sure enough, this was the case. You see, the test camera is fitted with a 2mb buffer, which is usually in use during normal operation. -click- goes the shutter, up flashes the "Buffer in use" icon for about 2 seconds while the usual card slowly writes the image to storage. This time, it was -snap- -snap- -snap- and not a buffer icon in sight! Test 1: Passed... easily!

Next, off to the PC to test the download speeds... let's do some maths... 624 images at around 1.2meg each, that's roughly 749meg of images... at 10mb/sec... 75 seconds is the target... it did pretty well, with a total time of 79.6 seconds... not too shabby at all actually, considering that the extra time is caused by there being so many files to deal with. As a further test, I cleared the card and loaded a series of test files onto the card. Firstly a 450mb text file, which should have taken 50 seconds to upload into the card at optimum speeds, and clocked in at a very respectable 51.85 seconds. Download of the file should have been 45 seconds at best speeds, and again made a very shiny impression when it clocked in at 46 seconds. Next was a 537meg Photoshop document. To write it, target time is about 60 seconds, and it made it up in a very impressive 64 seconds, and downloaded in a highly impressive 54 seconds, almost right on it's top speed! Test 2: Passed... swimmingly!

Now to address durability... the unit is technically a 1-piece unit, since the bottom plate never detaches, but I doubt that would remain the case for very long unless the card is treated with serious respect. The hinges that allow the bottom half to flip over and piggyback on the top half are most definitely the weakest point on the whole unit, and will, eventually, break. This is a statistical certainty. However, because of the design of the unit, I am not at all sure this would harm it's effectiveness much at all. Depending on how deeply your card is seated within you chosen camera, PDA, cellphone, etc... the card could still remain quite usable for a long time to come after any sudden accidents.

Overall, this is quite possibly the biggest, most impressive (r)evolution in portable storage cards in the last 5 years... however it may be cutting-edge design and technology, but with 2gb being the largest capacity unit on sale, it's hardly cutting edge in terms of storage size. I am sure this will increase soon enough, after all, they are losing some storage space for the USB interface, and there is no plausible way to make use of the bottom half of the card. As they find ways to shoehorn more chips into this tiny marvel, this will become the pack-leader, and it would be great to see this whole integrated-USB concept move out into other card types.

Incredible coverage and performance for your Connected Home