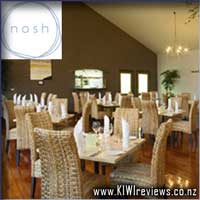 The stylish, modern yet relaxed environment is perfectly complimented by the New Zealand Cuisine menu.

After a stunning presentation to her work group on a previous occasion, my partner suggested we go as a family treat... We arrived about half an hour before the restaurant opened, so we decided to wait in the bar. Soon, the doors were opened and we were seated. After some bumbling around by a trainee waitress trying to explain a new menu that had only come into play the previous evening (is staff training REALLY such a dying art?!) we ordered our food.

First up, just an entree of garlic bread, which was quite nice, with excellent presentation on a plate drizzled with flavoured oils, and with a dollop of guacamole, and another of what was later revealed as a shrimp dip, on the side. A good start to the evening, we thought.

For mains I ordered a rump steak, cooked to 'medium', with onion rings, potato curls and a fried egg. This would normally have come with fried field mushrooms, but they were happy to withhold the 'shrooms, but reluctant to give me a second egg instead, asking that I pay extra! Of course, I declined. My partner ordered the pan fried salmon, and our son ordered the wedges with bacon and melted cheese, with a salsa on the side.

When the main arrived, we could see the wedges were missing the cheese and bacon, and my steak was missing it's egg. The Salmon meal looked about right. The waitress stuttered her way back and forth for a few seconds until she decided to take the wedges and steak back to the kitchen for 'repairs'... and when they returned, the wedges indeed had bacon, and cheese... though the cheese wasn't so much melted and charred to a crispy tentacular mass and thus the wedges were quite overcooked. To add insult to injury, they has supplied a 6 year old child with chilli sauce instead of salsa! The steak was unchanged, still missing it's egg...

Another return to the kitchen, then brought back shortly, with a barely-cooked egg thrown haphazardly on top. However, by now the steak had sat too long, and the meat had cooled, becoming quite tough and chewy, no longer any pretence of tenderness... and within moments two key facts became obvious: The steak had in fact been overcooked, far from the 'medium' I ordered I had received 'well done', and the meat itself was of a standard any professional butcher should be ashamed to supply, with fully a quarter of it pure gristle. Awkward to cut, difficult to chew, impossible to swallow, it was a travesty. I am quite a steak fan, and have enjoyed many a good slab o' beef at a local steakhouse so feel I have some degree of experience for comparison.

My son and I soon put down our cutlery, and abandoned our meals. After 10 minutes, to allow my partner to finish her Salmon meal, we packed up and walked to the counter to pay and leave.

Now, in fairness, when we reported to the staff that not only had they a member of their Advantage Plus club, but also a Mystery Shopper as diners in our party, they quite naturally freaked out. Immediately the offending dishes, wedges and steak, were removed from the bill. As well, they applied the full possible 50% discount as allowed by the Advantage Plus card, instead of the 25% discount that should have been applied since there was only a single meal on the bill by now.

On top of sincere apologies being tendered then and there, a detailed note was taken of our dining fiasco, which was passed not only to the kitchen staff, but also to the General Manager of the Novotel Hotel itself, who took efforts to phone me with an apology the next day. So even though the experience was deplorable, all fair efforts were taken to mitigate and soften the blow.

Overall... "Well Done" to the admin crew for at least trying to sweep up the mess... and a resounding "WAKE UP!" to the kitchen crew. The hotel may deserve it's 4-star rating, but the restaurant earned a far lower rating in my book that night. Taking into account all that contributed to this disaster, we might consider returning to try them again, especially as the prices are very desirable if you are a member of the Advantage Plus club. After all, they surely can't muck it up this badly twice could they?

Moxies is a vibrant Cafe with a relaxed atmosphere and extremely friendly service.