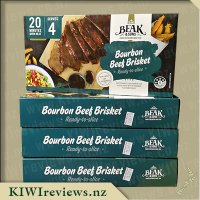 Succulent Brisket matched with a Bourbon flavoured glaze is the true taste from the deep American south. Beak & Sons Brisket has been tumbled in our Texan-style blend of spices and then slow cooked until the meat is full of flavour. Simply heat then slice the brisket into chunky slices, drizzle the glaze over and serve. 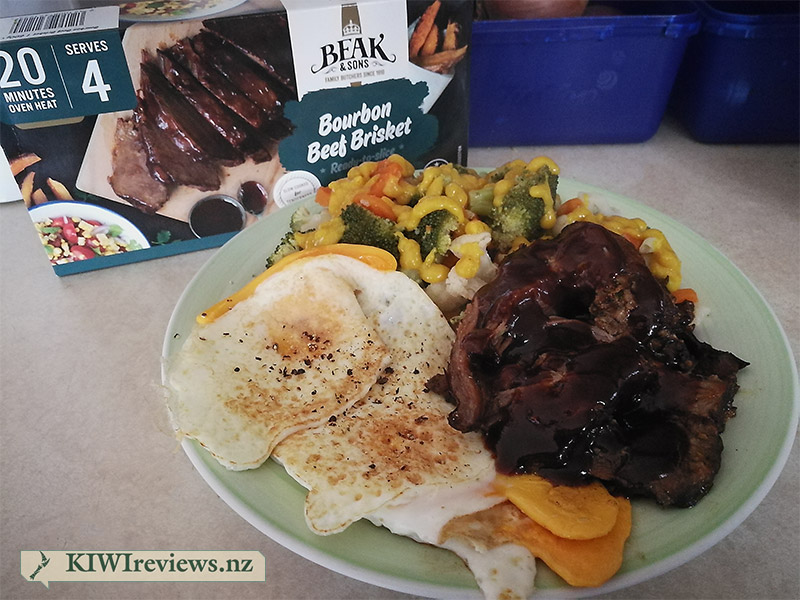 I have recently been experimenting with some keto-biased meals, to see how well they play out for me. One of the meals I thought I would whip up was some of the beef brisket with eggs and mixed veges in a mustard sauce. The theory was sound, at least, but the eggs ruptured and did not give me the soft-fried yolks I prefer.

The beef was sealed in a vacuum bag, so cutting seal means the clock starts and you need to use it all in 3 days. That's not going to be an issue, as it is so very more'ish, one box to serve four people can easily vanish in a day or two for one person alone. Having had experience with similar packs previously, before I broke the seal on the bag, I massaged the chunks around to break them up into four roughly equal portions, then slid a bag sealer between each portion to isolate them. Because these bag sealers will create an airtight seal, it meant that when I cut the bag, I didn't start the clock on the remaining 3 portions. In the end, a futile effort, but worth remembering for next time.

Futile effort, because over the span of 2 lunches and 2 dinners, I finished this box. Even if I had cracked the seal on the full bag, it still would have been gone well ahead of expiry. Yes, it tasted that good. The meat was tender enough to not require much chewing, but firm enough to stay intact as you dig your fork into it. The sauce is rich and dark, with fruity notes and smokey tones to give you a really well-rounded flavour hit when you bite down on it.

Overall, this was quite an appealing product that is on my 'whenever you can' shopping list. It's quite versatile - it pairs with a wide range of sides, such as fries, wedges, mash, carrots, greens, and quite possibly even a Summer salad. If you thinned the sauce down a bit, you could also serve this on noodles or rice, with some stir-fried veges.

I've had a bourbon beef brisket before, it was absolutely delicious but sadly it was as we were on route from one place to another, in Arizona, and since then I haven't gone anywhere that was serving it, so it's been awhile. With fond memories I requested this and was keen to give it s try. I like that one side of the packaging has the name loud and clear, so you could stack these in your fridge and easily see what you're picking, there's no need to pull them out to ensure you're grabbing what you want. The instructions on the back are nice and easy to follow, about the only thing I think would make the packaging would be some written suggestions of what to serve this with.

I must say that I was looking forward to trying this as it began to fill the house with a nice aroma. Getting it out, it looked good but once I took a knife to it everything turned to custard. I used the sharpest knife I had yet this meat decided to act as is I was shredding at it with a hand full of knives... So we didn't end up with any nice slices of meat. I drizzled the sauce over and dished out some of the meat to my kids and I. My youngest and eldest both promptly turned theirs down, saying they didn't like the taste at all. My middle child thought it was delicious and happily took their portions. I, myself, found that I didn't like the sauce at all, so I had some of the meat that hadn't been covered and passed the rest to my middle child.

My middle child is keen for us to buy this again but given that three of us aren't, she is outvoted (at least until she has a job of her own).

Now, Beef Brisket is a meat that I've had a few times before, and it is incredibly tender as it is usually slow-cooked for 16+ hours. I don't have time for that though, so I was very interested in trying out this beef brisket that is ready in 2.5-20 minutes.

It comes in the usual glossy Beak & Sons packet, with some gorgeous photos on the front of some tantalizing foodstuffs. Cardboard box is recyclable and that same standard size and shape that the rest of the range has. Very easy to stack and store, and the plastic vacuum-sealed pouch inside means there is no risk of leakage or mess no matter which way you stack the pack.

Not sure whether beef is cheaper meat, but out of the lamb, pork, and beef, it is the beef that comes with the largest portion. As a man that loves his meat, the weigh and size of the meat definitely puts a smile on my face. This product actually comes with an extra sauce sachet.

The brisket is incredibly easy to reheat (it is already pre-cooked), and is either a couple of minutes in the microwave or 20 minutes in the oven. I didn't want to dry it out (even though there is so much sauce!) so I went with the oven. Simple and easy to do. One thing I did note though, is once the sauce warmed up and thinned out, you could clearly see that there was a fatty half, and a meaty half to the product (this could explain why the portion in the pack seemed so large).

I only realised this once I pulled out the meat after I had finished heating it, and realised that the meaty side was on top, so obviously, the fat was melting away into the pan. I would recommend feeling the texture of your meat to check which side is which and heating it with the fatty portion on top. This should let the meat soak up the fat and sauce, rather than leaving it in the bottom of the pan and having the meat dry out.

You can see from the photo I have uploaded that the meat did end up a bit drier than expected, so I definitely needed that extra sauce sachet. The texture of the brisket did not really work too well for slicing, but it is great for shredding with forks. The flavour is quite earthy and works well with the tang of the sauce, but what I really enjoyed was the 'burnt edges" flavour that I'm used to tasting with those really slow cooked briskets.

Despite it being a little drier than I was expecting, I really enjoyed the flavour and texture of the meat. As a quick google has told me that beef brisket usually has a fatty cap, I'd recommend Beak & Son look at adding the correct orientation to their directions, to ensure the product comes out the best it possibly can. Still impressed. 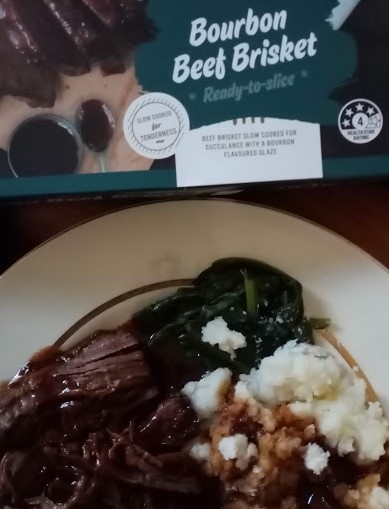 I have had Beak & Sons products several times now and have always been impressed by their convenience and their value for money. This packet was advertised as being sufficient for four people, and I would agree with that - we shared it with my cousin and his wife, and there was plenty for everyone. I had fresh spinach in the garden, something I always think goes well with beef, and a dish of mashed potatoes finished off the meal nicely.

I am now an expert at getting the contents out of Beak & Sons' packaging. The gravy is vital for the flavour of the finished product, so I open one end of the plastic inner, tip out the meat, and then scoop out the juices with a flat-ended wooden spoon I keep specially for this purpose. The spoon ensures that every last drop is extracted before the packaging is discarded! And there was plenty of gravy, and an unmistakeable smell of bourbon as the contents were moved to their dish.

I made the mistake of heating the meat in one piece with the juices poured over. Once the slab was heated through, it was impossible to slice it because it was just too tender. What I should have done was to slice it while it was still cold and then reheat the slices in the sauce. Nobody complained. however; they were pleased with the product and said it was far better to be tender and tasty than tough - even if it had ended up in perfectly symmetrical slices.

I had thought at first of baking it in the oven with other root vegetables like pumpkin and kumara, and possibly even a tray of Yorkshire pudding, but time was limited: they were travelling home later that evening, a two hour journey, and had called in only for a quick visit - so they were delighted to be presented with dinner rather than having to rely on takeaways when they got back on the road. That is the beauty of these products; you can make them into something elaborate and time-consuming if you wish, or you can make a quick meal (as I did) in well under half an hour - literally, the time it takes to boil a few potatoes.

We all liked the spicy flavour of the gravy. It contained not only Bourbon, but also a spice blend (described on the packet as Texan-style) which added some heat and a lot of interest to the dish. Braised (or slow cooked) meat can be quite insipid without some added flavour, and if (like me) you cannot eat too much salt, it is important that the extras enhance the flavour properly. We all agreed that this was a worthy combination with enough interest for everyone, even my cousin who likes really hot food.

Welcome our newest member of the Licorice Allsorts family, Smallsorts. A 180g bag of Small licorice allsorts with mixed flavours.