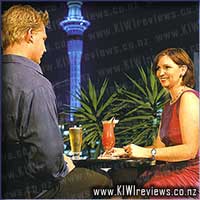 Overlooking the picturesque Waitemata Harbour in the heart of Auckland city and located adjacent to Britomart transport centre, the hotel is an easy walk to the waterfront and the best shopping, restaurant and nightlife districts in Auckland.

For dining, relaxing or socializing, discover our restaurant and bar.

After a day of attending conference, we decided to meet up with some of the Auckland team and head out to somewhere different for dinner. This place was at the top of our 'to do' list and, located down by Auckland's waterfront, was a mere 7 minutes walk from the SkyCity Conference Centre. We arrived a little late, and the Auckland team were having trouble finding parking, so the helpful man at the front counter agreed to ring up to let them know we were awaiting the remainder of our party. Once they arrived, we shot up the elevator to the restaurant.

Upon arrival at the floor, we walked around the corner into the main bar and dining area. With night well upon us, looking out over the harbour was a stunning sight. The city's waterfront and seascape lit up with an array of lights, all doubled by the harbour waters. It was like looking at a swarm of fireflies dancing gently. The staff were friendly and helpful, to the point of letting us know that because of the big tour group, we should order our mains fast or risk being left late. That was a really nice touch. Complimentary breadsticks with pesto were presented after orders were placed, which was very nice, as it gave the kids something to snack on, although once we adults tasted the basil pesto, the kids had to be quick to get any breadsticks.

For starts, we ordered the 'rustic breads with olives and dips' : at least 4 different breads, green olives, balsamic vinegrette, and garlic hummus dip. Delish, but not really enough to satisfy 4 adults and 2 kids... those breadsticks sure saved the day there. We all agreed, they should have skipped the vinegrette and double-dosed us with the hummus, as that just vanished... even the kids liked it!

My son ordered the cheese and tomato pizza, served with minted roasted baby spuds. He loved it, which was great, since it was very late for him and he was flagging fast. 2 big slices of pizza, a handful of baby spuds cut in half and lightly roasted, and a drink. Quite good for kids, though there weren't many 'healthy' options available on the kids menu, which I thought was a little strange.

Mains arrived. I ordered the Tandoori roast chicken breast in a pita wrap with mango and salad, with a side order of roasted root veges: carrot, kumara & parsnip. The chicken was nice, if a bit dry, but the salad was rather unpleasant. I don't know the name of the leaf that tasted so strongly foul, but it really did ruin the meal for me.

After learning a lesson from our dining experience the night before, for dessert my dining partner and I selected the taster plate: passionfruit poached pear with a chocolate cake base, white choc and feijoa pudding with a berry sauce, and the trio of sorbets: strawberry & raspberry, lime & lemon, mango & passionfruit. At least, that's what the menu led us all to believe. At $24, it should have been spectacular, instead it was quite a dud. What we got was: A pear, kinda-cooked but very hard still. Difficult to cut, and swimming in a small lake of friction-reducing sauces. We almost lost it off the plate at least half a dozen times, in the end reducing us to fits of giggles while THREE of us had to pinion it at one point! No chocolate cake base though... One small piece of white choc pudding that was really tasty, but not enough for even the 2 adults who were sharing it... and instead of a sampler of the sorbet trio, we instead got one small ball of the lime & lemon flavour only. Much discussion was had with the staff about this, who eventually got permission to supply us with a small bowl with another single scoop of sorbet, this time the mango & passionfruit. Very disappointing, especially as the first thing they tried to do was tell me the menu I was holding in my hand actually said 'one scoop of a sorbet' when it clearly said 'sorbets'... plural... more than one... and nothing about only being one scoop. However, by far my favourite flavour was the mango & passionfruit.

Overall, the staff were hovering and overly obvious, friendly but a little disorganised.We were asked no less than 6 times, by three different staff, if the meal was to our satisfaction... at one point getting asked TWICE in under 2 minutes, by the same person! Some training in communication would benefit, as well as a night of intensive study under the crew from the Acacia Restaurant team. Averaged out over the 6 meals, the food was nice, the views were spectacular, and the night wasn't too expensive, at around $170 for 4 adults and 2 kids, plus 2 bottles of wine and some assorted drinks. Using the AdvantagePlus membership saved us quite a bit of money, bringing the bill down from over $230. I don't know if I would go back again until after they do a menu overhaul, but I think I probably will go back one day.