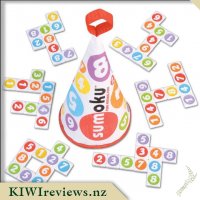 Sumoku is a crossword-style game with colored number tiles that can be played five different ways. In all Sumoku games, game play starts with the roll of a die to create a "key number" â" either 3, 4 or 5. The digits in all groups of tiles placed in rows and columns must sum to a multiple of this key number. A tile is one of six colors, and a color cannot be repeated in a connected set of tiles.

In the main game, players draw eight tiles to start the game. On a turn, a player adds a single row or column of tiles to the playing area to create valid plays â" that is, the sum of the tiles played and all rows or columns added to during that turn sum to a multiple of the key number. The player scores the sum of the tiles played, and the sum of tiles in any row or column added to during that turn. If you finished a row or column of six tiles â" that is, one with all six colors â" you take another turn immediately before refilling your hand to eight tiles. The game ends when no one can play, and numbers in hand count against a player's score. High score wins.

Other games include "Speed Sumoku" in which players each have ten tiles and try to create a crossword-style grid in which all sets of tiles sum to a multiple of the key number before anyone else. "Team Sumoku" plays similarly, but with each team creating one grid. "Spot Sumoku" has players trying to spot four tiles that sum to a multiple of the key number rolled from a public array of ten tiles. "Solo Sumoku" tasks a player with drawing 16 tiles and creating a legal grid from them, then drawing ten more tiles and adding them to the existing grid in a legal manner, then doing this with another ten tiles, and so on through all 96 tiles.

Sumoku arrived in the shop I worked in and I thought I would grab a copy, mostly to be used with my youngest and their homeschooling, but also because it seemed a lot like other games I have played and enjoyed before. The tiles come inside a handy bag, which feels nice and sturdy and has room enough to fit the rules, game tiles and the large dice that comes with the game. The tiles are a nice and sturdy plastic and have a good feel to them, the dice in comparison feels a bit too big, but I guess since you pop it to the side, the size has the aim of still being nice and visible no matter where you place it.

Gameplay is nice and easy to learn, but don't let that fool you... You roll the dice, just once for the entire game and it will land on either 3, 4 or 5. You then place your tiles down so that whatever they add up to is a multiple of whatever the number that was rolled is ie. 3 + 3 + 9 + 6 = 21 and the dice is showing the number 3. However, the tricky part lies in the face that there are six different colours and they aren't allowed to repeat in the same row or column, which can be annoying if you have the right number but wrong colour. If you do mange to finish a line of 6, however, you immediately get to play more tiles, for extra points.

I can imagine a need to shorten the game when playing with those not so adept at maths or multiplication, but for those of us who are adept, this is a fun puzzle game that could drive you just a little crazy.

The Master Chief returns to battle an ancient evil bent on vengeance and annihilation. Shipwrecked on a mysterious world, faced with new enemies and deadly technology, the universe will never be the same. Enlist aboard the UNSC Infinity to experience Halo's original multiplayer and Spartan ... more...