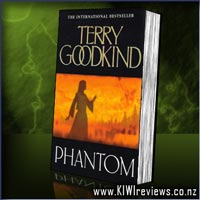 As her husband, Richard, desperately searches for his beloved, who only he remembers, he knows that if she doesn't soon discover who she really is, she will unwitting become the instrument that will unleash annihilation. But Kahlan learns that if she ever were to unlock the truth of her lost identity, the evil would possess her, body and soul.

If she is to survive in a murky world of deception and betrayal, where life is not cheap but fleeting, Kahlan must find out why she is such a central figure in the war-torn world swirling around her. What she uncovers are secrets darker than she could ever have imagined.

Super Diaper Baby 2 - The Invasion of the Potty Snatchers
Rating: 9.5

As you may have guessed, I kinda liked the latest edition to the Sword of Truth books... But hey, I've been a fan from the first one, so it's not really surprising.

Fantastic to have Kahlan back in the story this time...
She brings a different dimension to the stories - even though she still doesn't know who she is, or exactly how important she is to the New World, and to one man in particular, Richard Rahl.

Richard is as focused on finding his wife as ever, although this time he is tempered by the knowledge that he and his friends have to figure out has to take the boxes of Orden out of play, stop the Chainfire spell from destroying all magic, find out how much damage the chimes did to magic when they were loose and on top of this, he must also lead the D'Haran army against Jagang's army which is almost on the doorsteps of the People's Palace.

Several characters from pervious books make a reappearance in this book. Rachel is thrust back into the storyline when Chase is run through by Samuel and she is kidnapped. She is taken back to the last place she would ever want to be... the clutches of the evil Violet!

Violet is after revenge on Rachel and Richard, but in fact she is only a pawn of a new evil influence in the story... Six, a twisted witch woman who has bigger plans than simple revenge.
And she manages to carry some of them out and puts Richard in the very last place he would want to be... magicless and imprisoned by the Imperial Order!!!

Shows readers how familiar plants and animals change and develop over the course of their lifetime. This book features photo-illustrated life cycles and fact files.