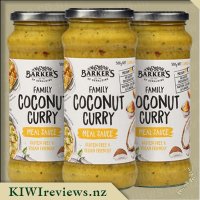 Our Family Coconut Curry meal sauce is a medium spiced coconut based curry ideal for the family. This smooth, spiced meal sauce is versatile as it works with many meats as well as fish and vegetables. An easy solution for enjoyable dinners including baked fish curry, slow cooked chicken curry and a creamy lentil curry.

Coconut is one of my favourite flavours. I often cook with coconut flour, and use coconut milk in smoothies and home-made curries. So this product was tailor-made for me; I was pretty sure I would like it but was keen to get other people's views as well. So I compromised. I used half of the contents to make a fish curry to have at home, and took the other half to share with friends. On opening the jar, I was very happy to find that the expected coconut-and-curry smell was there, and the first taste of the contents confirmed that this was indeed a flavour I would like. There was a slightly sweetish aftertaste which complemented the coconut beautifully.

The first half of the jar was cooked for a meal at home (just two of us) and I was worried, knowing that Barker's portions tend to be on the generous side, that we might not eat it all. My concerns were groundless; the assembled meal was so delicious that neither of us stopped until every scrap had gone and the plates were so clean they barely needed washing! I am glad I had used only half the jar as we would probably otherwise have finished the lot.

I had chosen hoki and shrimps as the base, accompanied by sliced avocado, Brussels sprouts, and lettuce. It was beyond delicious! Although the coconut and curry flavours were both easily distinguishable, neither of them was too strong so the fresh food also shone through. In some ways I thought it looked like piccalilli, although it did not taste especially like it. The creamy texture and bright yellow colour were most attractive, and as a bonus this meal was particularly low in both carbs and calories so for anyone on a diet or following a keto regime it would be an ideal choice. Not that it had any resemblance to the traditional idea of what a "diet" food might look like! And the other bonus was the time factor. The entire meal took just ten minutes to prepare - it would have been even less if we had not included the sprouts.

The other half of the jar was shared with three other people, two grown-ups and one child. We three adults all enjoyed the sauce, mentioning in particular the portion size and the convenience of having a resealable container so that any unused amount could be used on another occasion. We divided the sauce in two (125g each), mixing one quantity with tofu and the other with cooked chicken. The two mixtures were then reheated separately and served as an entree. This was a useful way of ensuring that everyone could taste it and offer their feedback.

The three adults liked the unexpected "aftertaste" which kicked in after you had eaten it. and thought that made it a cut above other similar products. They thought the mild flavour would make it an ideal choice for mixing with a number of other dishes, both hot and cold. One person suggested using it with an egg curry, or a potato salad - both dishes that can be served warm or cold. Using it instead of a cheese sauce to top broccoli or cauliflower was another suggestion. They liked the way it sat on the tofu without melting into it, and thought it would be good for people who don't usually eat tofu because it would disguise it. They also enjoyed it with the chicken, finding it went further than they might have expected.

One downside with the coconut curry was that the other people present (two children and two adults) were not particularly interested in trying it. The fourth person to try it with us (and also the third child present) had some, and said it was ok: he would eat it, but it was not his favourite. Clearly this is a taste that has more appeal for adult palates. As a result, the parents with the younger children would probably not buy it for their own family. But from my own point of view, this is a sauce that I will buy again - the reasonable price, the healthy ingredients, and the amazing taste are all something I would look for in a product like this.