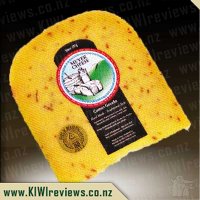 Disclosure StatementFULL DISCLOSURE: A number of units of this product have, at some time, been supplied to KIWIreviews by the company for the purposes of unbiased, independent reviews. No fee was accepted by KIWIreviews or the reviewers themselves - these are genuine, unpaid consumer reviews.
Available:
selected stores

Even though Cumin is an Indian spice cumin Gouda is an extremely tradition Dutch cheese. Early spice traders from India set out for Europe and the spices were quickly found to be used in the Cheeses. Not only was the flavour really good but it also added a nutritional value to a travel ready product.

Cumin Gouda is one of our more popular cheeses, winning numerous Gold medals at the NZ cheese awards and topping our sales charts this one is Highly recommended.

Cumin Gouda comes in all ages from 4 weeks right up to 12 months, the most popular is the Mild (4 weeks) and Medium (8 weeks).

I managed to get my hands on some Meyer Cumin Gouda cheese to try out and write a review about. I'll start off by stating I am not a cheese expert by any means but I like trying out new flavours. For the flavour of this cheese I will have to say I am not a fan of it, and that is not saying anything negative about the cheese just stating my tastebuds are not a fan of the cumin taste.

The cheese itself was well packed, and labelled so I knew exactly what I held in my hand. It also had a great consistency and did come through as a quality product. To get the full flavour of the cheese we just ate it on some plain crackers.

Would it work well with other things or in a recipe type situation? Well I guess it all comes down to if you like the taste of cumin, if you do then I think this will work great for you, if not only try it if you are feeling adventurous as there are many other types of cheese that Meyer make that you will love.

So there we go, something different to try if you are a cheese kinda person.

My mokopuna always complain when I try to teach them about the past by telling them about my life. There was once a time when our young would sit at the feet of their elders and listen with awe and respect, knowing that this was the way knowledge is passed down the line. Now days if it doesn't pop up on a quiz show to be turned into a joke, or get downloaded on the internets, then it's just "boring old man stories" that are not worth listening to. Better to plug some MP3's into their ears and gyrate around like they are having some kind of seizure or demonstrating their favourite sexual positions.

But I have lived a long and adventure-filled life, seen places on this earth that don't exist any more, and eaten foods that no-one in their right mind would touch these days. But that's what you do when there is nothing else to eat. And more importantly, I have seen craftsmen take raw materials as humble as milk, fresh from the cow, and over time turn it into some of the most amazing cheeses, yoghurts, curds, and the likes. So I think I can recognise a quality handcrafted artisan cheese. If you want a good example, you don't need to look any further than your nearest stockist of Meyer cheeses.

Gouda is a very traditional Dutch cheese, hardy and travels well if it has been aged properly. This was the original "take aways". Protein to go. A traveller was doing well if he had a flask of wine, a wedge of good Gouda, and a loaf of bread in his knapsack. Anything else could be found, bartered or borrowed en route. But I have to say I never would have expected Cumin to appear in a Gouda cheese, because Cumin isn't the first herb you think of as a partner for cheese. Surprisingly, it actually sort of works. But I must be honest and say that Cumin is not my favourite spice so this wasn't a huge hit with me.

Mind you, when I added it to my "review gumbo" made with baked beans, salami, ham, onions, some bbq sauce and about a third of this block of cheese grated in, I could still taste it and it added a really nice flavour to the meal. I was very surprised at how well the cumin and cheese flavour made it through the bbq sauce. Probably helped by the beans being the cheapest can of junk beans you can buy.

No flavour of their own, so everything else came through. On its own, the cheese has a very nice texture. Quite smooth and creamy compared to other Gouda cheeses I have tried. I can tell this is a cheese hand-crafted by someone who knows what they are doing. Probably part of a family lineage of cheesemakers. That kind of love and care does come through in the final product. Compared to store-bought, this cheese has a lot more character and flavour, which is why I think it is worth the price tag.

I was lucky enough to get this cheese to sample and review, but unfortunately out of the 3 flavours I tried, this one was the least liked. In general everyone who sampled my Meyer cheese loved it, however not so much the cumin.

Cumin is one of those tastes you either love or hate and my husband definitely didn't like it at all - he wouldn't even eat it after the first bite. However I was able to appreciate a little more that cumin is a popular cheese flavour and I thought it was OK - but I couldn't say I absolutely loved it. This is more of a reflection of the cumin flavour, rather than Meyer cheese in general though.

My mum commented that she thought this cheese didn't have enough bite to it, and she didn't like the texture as much as some of the other cheeses. She felt that if she was going to buy a speciality cheese, she'd want something with a lot more flavour.

I did find it melted nicely and it made a lovely grilled sandwich, padded out with tomatoes, ham and mushrooms. Biting into the melted cheese, I noticed it stretched out nicely and was fun to eat too. Because no one else seemed to like it, I ended up eating most of it and found myself liking it more and more, the more I ate.

I'll be definitely buying Meyer cheese again but although I did grow to enjoy this one, next time I'll be looking for a different flavour that is more likely to appeal to a wider range of pallets.

Scoffing this tasty mix of chicken, red capsicum and mushrooms in a spicy coconut cream sauce is like taking a ten minute tropical holiday.