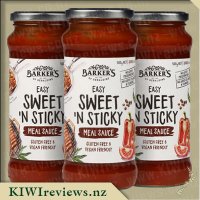 Our take on sweet and sour, this easy to use Easy Sweet'n Sticky meal sauce is a favourite for BBQ lovers' and meat eaters. An easy solution for enjoyable dinners including sweet & sour chicken, pork ribs and sticky meatball subs. 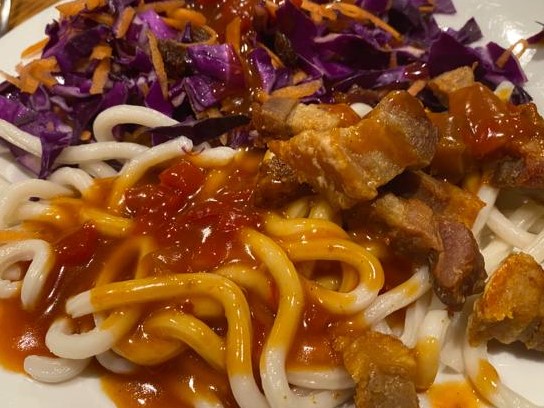 The children thought Sweet 'N Sticky was a wonderful name for a sauce. Miss Eight asked if it was something we would be having for dessert - I think it conjured up images for her of a steamed pudding with sauce on top. Mr Ten predicted that it would be an oriental cook-in sauce which would probably be made with chicken or prawns. In fact, neither of them was right. Moreover, when given the chance to taste a little on a spoon, they were not keen on trying it at all - they preferred to leave it to the adults!

When we checked the ingredients, it did not appear that this was a product specifically targeted to adult palates, so it may have been the proportions of the different items that made it more grown-up friendly. We tasted the sauce too before using it, and all three of us liked it. It had the added benefit of not being too sweet, and there was an underlying zing to it, so perhaps that was what gave it a more sophisticated flavour than that of a conventional sweet-and-sour sauce. This was more like a sauce we would make in our own kitchens.

Because we had already tried one of these sauces and knew that the helpings were very generous, we decided to make two different dishes to have on two consecutive nights. With vegetables, the dishes would both stretch to feeding three adults. Meanwhile, because we were using regular ingredients, the same dinner could be given to the children but minus the sauce. They could always use bottled tomato sauce instead!

Our first meal consisted of crispy roast pork pieces served on noodles and accompanied by a red cabbage winter salad. Rather than cook the pork in the sauce (as this would have stopped the crackling from forming), we simply heated the sauce and poured it on top of the meal. Doing it like this also meant the children could have the same food combination, thus saving time. We loved the tangy flavour with the pork, and it was also nice with the salad. Instead of soft noodles we could have added rice or even crispy noodles; the effect would have been similar. Miss Eight did taste a little of the sauce on her own pork, but said she was still not keen - although she might eat it if she was really hungry!

Next day we put the remainder of the jar into the slow cooker along with slices of pork fillet, chopped leek, and chopped onion. We deliberately included vegetables that were not too strongly flavoured so that they would not overshadow the flavour of the sauce. It chugged away for several hours; when we went to serve it, the pork was soft to the point of almost melting and the added vegetables had all but disappeared into the sauce. This time we served it on a base of cauliflower rice, something I have discovered recently and which makes a welcome alternative to ordinary rice. Again, the children tasted it; Miss Eight liked it done this way better as it was more dilute due to having been integrated with the other ingredients. Mr Ten said it was marginally better but not really his thing. Luckily, we had fried their portion of pork and vegetables separately, so they just got a stir fry instead!

I would use this product if I were cooking dinner for several friends but would probably avoid using it if there were children to be included. It is ok to use an alternative with your own family, but it can be tricky when you are entertaining. Personally, I liked the sauce and so did my daughter and son-in-law, but we recognised also that it is not for everyone.

Boneless chicken breast filled with cheddar cheese and ham and coated in a multigrain crumb.