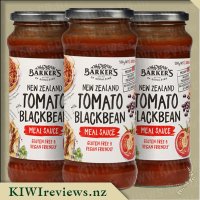 Made with New Zealand tomatoes, our NZ Tomato with Blackbean meal sauce is versatile and will become a pantry staple to have on hand for weekly use. An easy solution for enjoyable dinners including beef nachos, sausage bake or Mexican vegetarian lasagne. 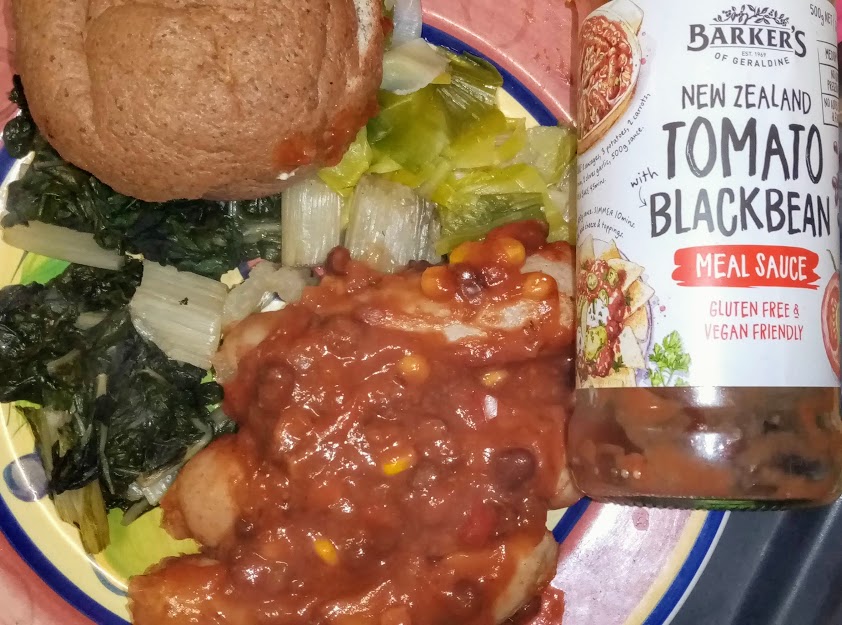 Since there were just two of us for dinner, we thought it would be sensible to just use half and save the rest to have with something else in a day or two. We were impressed by the look of the sauce in the jar - there were whole corn kernels and beans clearly visible in the tomato mix. This was going to be no pureed flavouring; the sauce looked chunky enough to eat on its own. However, we did want to try it out in a couple of different ways, so we satisfied ourselves by trying a little on a teaspoon. So far so good - a nice full flavour.

I had some home-made fresh beef meatballs in the freezer so for the first meal we simmered them in the sauce until the beef was cooked through. The sauce thickened as it cooked, but it maintained its consistency - the corn and beans could still be seen clearly. Baked potatoes and grilled tomatoes completed the meal; the potatoes were perfect with the sauce as they soaked up the flavours. I was going to mash them, but in the end I baked them instead. This was a good choice as the crisp skins went well with the softer meatballs and sauce.

Once it is opened, the sauce will keep for seven days. This is especially useful when you are cooking for just one or two people as it can be used in more than one recipe. Food can get boring if you have the same thing two days running, so I made sure to prepare it differently the second time round. We had some lamb sausages that I thought would be a complete contrast to the meatballs. This time I used a slow cooker to prepare the meal so that the sausages would not dry out. Once they were ready, I served them with green vegetables (leeks, broccoli, and silver beet) and bread rolls.

What we found interesting was that the meals were quite different from each other. The meatball meal ended up quite sweet, probably sweeter than we would have liked, so we added a slosh of sushi vinegar and another of soy sauce. This sorted it out to our satisfaction. The sausage meal, on the other hand, was much less sweet. I think this may have been due to my serving it with silver beet: this vegetable is strongly flavoured and proved to be a good foil for the sauce.

One thing we did both comment on was the way the sauce was made. When we saw the words "black bean" on the label, we had both expected an Asian style sauce which might be quite salty. Instead, the beans in this product are whole and their flavour is much less prominent. In fact, we thought it was closer to a Mexican sauce and that started us thinking. Next time we serve it, we will add a little chilli and try it with nachos and cheese. Although I make my own salsa most of the time, there are always days when I am in a rush; that is a good time to have a ready-made product in the cupboard.

Incidentally, there was a little sauce left in the slow cooker after we had finished our sausage meal, so we spooned it out and had it for supper on cold beef sandwiches. It was just like a chutney, although runnier, so sandwiches made in this way would probably be best eaten immediately to prevent the sauce soaking into the bread. All the same, it was interesting to find that it was just as nice eaten cold.