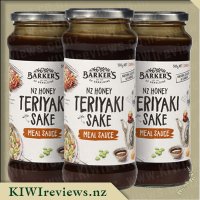 Our twist on family friendly teriyaki sauce made with New Zealand Honey and twist of sake, this sauce is versatile for red and white meat, seafood, vegetables and tofu. Barker's NZ Honey Teriyaki with Sake meal sauce is an easy solution for teriyaki chicken kebabs, vegetable stir fry or teriyaki tofu bowls. 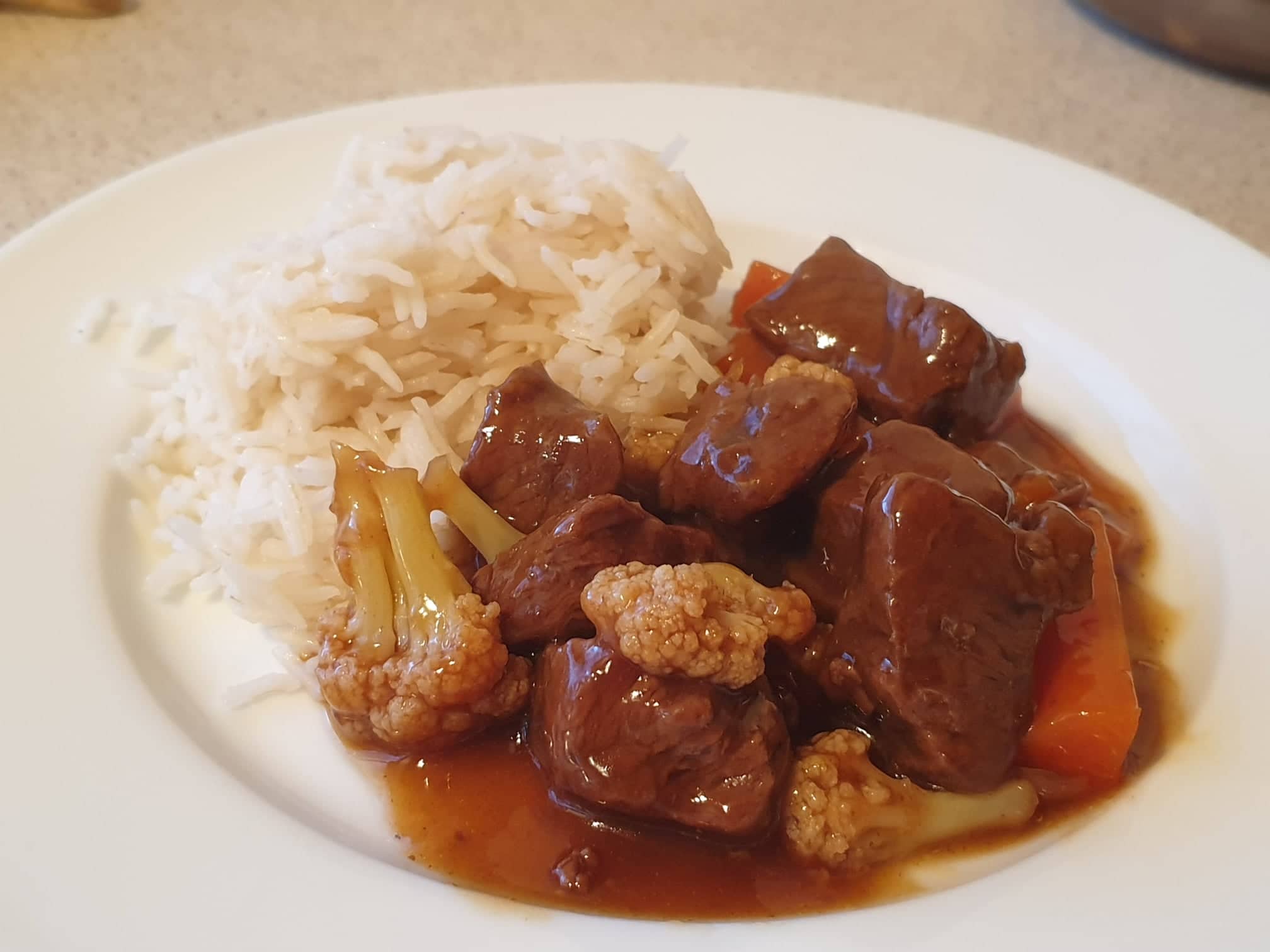 As a male that has been single for many many years, it is safe to say that my cooking style has been less than adventurous. Always on a budget, and always wanting to eat with minimal effort, I've become quite the professional at preparing, cooking, eating, and cleaning 3-ingredient meals in under 30 minutes. While quick and easy is my unofficial motto when it comes to food, I can still get very bored of eating the same meals over and over. This is where meal sauces come into it.

With minimal ingredients comes a lack of spices and sauces with which to cook. Purchasing enough spices to make a great curry ends up being rather expensive if I don't have any of the spices to begin with. Meal sauces, on the other hand, include all of the sauces and spices needed to complete the meal. All I need to do is to choose what meat or vegetables that I want to include, mix it all together and sit it atop some rice. Nice and simple, right?

To an extent it is that simple. Cut and sear the meat, add the chopped vegetables, and pour over the Barkers Meal Sauce. At least I hope that is what I need to do. Because unlike other meal sauce packets, the directions are practically non-existant. There are some diagrams with the most basic of recipes printed below them (e.g. Chicken and vegetable skewers, 7 minutes) but there is little other direction. Do you know how much meat you'll need for the sauce? You better guess right or that teriyaki is going to be so sweet and sickly. Do you know what meat and vegetables to use? If you don't, the flavours might clash. Does the sauce need to be cooked, diluted, or thickened? I guess that's totally up to you.

Not being a big cooking person, the meal sauce was easy to use but still felt out of my comfort zone because I've never cooked teriyaki before; I didn't have the answers to any of the aforementioned questions. I grabbed a sirloin steak and cubed the meat, pan-fried it along with some cauliflower and carrots (as they were the last vegetables I had in the house) dumped in the sauce, covering for a little while to let the sauce absorb into the meat, and then letting it simmer uncovered until it reduced.

The aroma was strong, the flavour was significant but not overwhelming, and the sauce thickened into a nice glaze. It worked out really well, despite my reservations. Would I try it again? I probably would. Do I still wish it gave better direction? Totally, I would have loved to know a quantity of meat or recommended pairings. Still, it was quick and easy, with no mess. Worth a try.

When you are short on time, or out of ideas for making a meal, a meal sauce can be the answer to your cooking conundrums. Many meal sauces are either over sweet, over salty or just completely lacking in any real flavour, and for this reason I have often steered clear of them. However, with the new range of sauces from Barker's of Geraldine, my interest was peaked. Our household has loved everything produced by Barker's which we have tried so far, and knowing their ability to combine flavours and quality ingredients to produce something really delicious. We were particularly excited to try this NZ honey teriyaki with sake sauce, as Japanese is one of our favourite cuisines to eat as a family. The combination of a teriyaki style sauce combined with NZ honey is a guaranteed to appeal to the whole family.

When we received the sauce I was really pleased that it was in a 500g glass jar. This is a very plentiful sauce, and would almost be enough to do two meals for a small family. The label on the jar is incredibly helpful, not only giving the usual information such as nutritional information and ingredients, but also giving simple meal ideas to use the sauce for. This would make these the perfect thing to keep in the cupboard in case of those nights where you are not feeling the inspiration to cook. The ingredients were also very reassuring, with most being a part of my pantry, so I felt it was much more like something I would produce myself at home.

We tried this sauce as part of a vegetable stir fry with noodles. The first thing that was obvious about this sauce was the love and care which had been put into producing the recipe. The flavour was delicious, and really similar to a traditional teriyaki sauce. When I first opened the jar, the smell of sake was very strong, and this made me a little worried about how family-friendly the meal would be. However, when the sauce was cooked and combined with the other ingredients, different flavours came to the four, and the sake was simply a delicious back-note rather than the sole focus. The honey was also a really delicious sweetness and smokiness which worked to perfectly compliment the sauce as a whole. We enjoyed this over a vegetable stir-fry, but I could see it working over any variety of meats or tofu as well.

What a fantastic sauce. The perfect compliment to many types of meal, and one to be loved by the whole family. This definitely makes me very keen to try out other sauces from this new range, as well as keep a few in the cupboard for those nights where you need something fast and delicious with minimal effort. 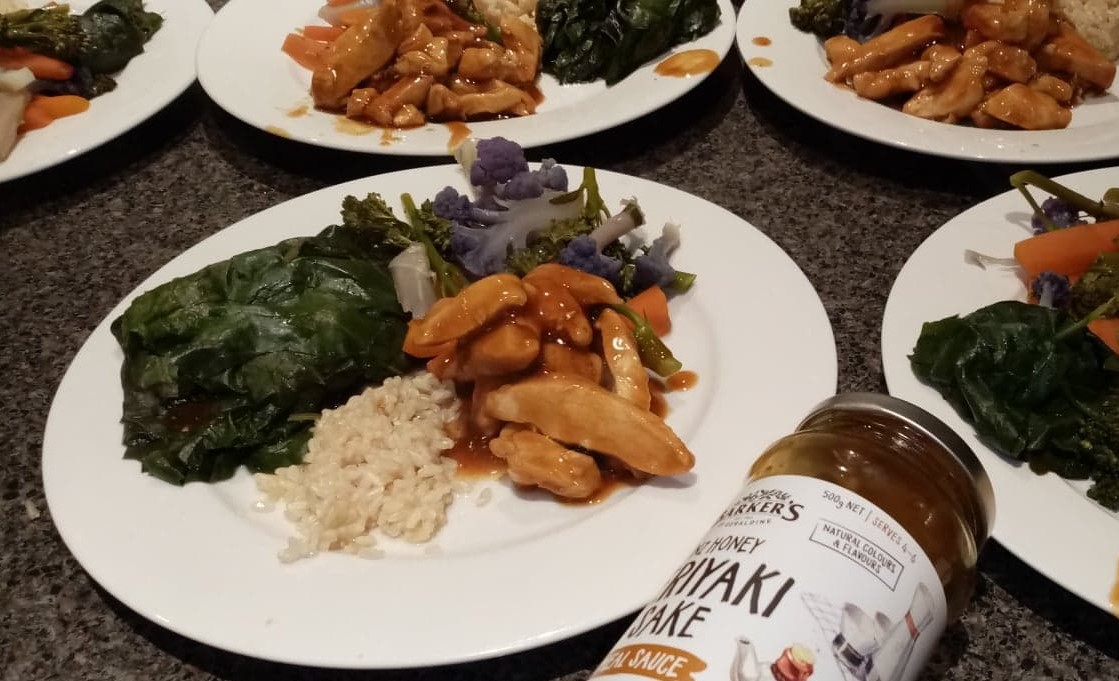 There is nothing like a dinner party for testing out a new product - especially when there are people of different ages to contribute their opinions. On this occasion we had two boys (12 and 10), one girl (8), two men and three women - two families who were catching up after not seeing one another for several months. Everyone likes chicken so we chose to simmer it in the Honey Teriyaki with Sake sauce as I thought the mild flavour might go down with the kids as well as with the grown-ups.

All of us are familiar with Barker's products, and generally enjoy them, even three of the males who are often picky about what they eat. The exception to the male pattern is Mr 12, who is growing fast and likes pretty well all food. Most of us tasted a little of the sauce on a teaspoon, and the first reactions were great. Mr 10 was unsure, but everyone else who tried it thought it would be really good once it was cooked with the meat. Two people mentioned the smoky sweet scent, and the spicy aftertaste, once they had actually tried a little.

We chose to serve it with stir-fried vegetables (broccoli, carrot, cauliflower), rice, and silver beet. We could have combined the meat and vegetables and cooked them all in the sauce together, but we did not want to dilute the flavours too much - the impression we had from tasting the contents of the jar was that they were quite delicate. And there was also the danger of somebody not liking the sauce at all - they could then fill up on the vegetables!

Mr 12 was definite - he loved it, and if there were any leftovers they were his! He likes teriyaki anyway so was already in the mindset to enjoy it. It was hard to get any detailed comments from him, however, as he was too busy eating his serving. Mr 10 liked it too. He had not been keen on the sauce when he tried it prior to its being cooked, but once it was combined with the chicken he said it was amazingly good, especially when he swallowed it because he could still taste it as it made its way right down to his tummy. (His own words!) Miss 8, not wanting to be outdone, made up her own word for it - scrumdidiliumptious, which caused a great deal of laughter around the table. She even spelled it for me to make sure I wrote it down properly. Reviewing products with kids can be hilarious sometimes.

The adults were less colourful in their descriptions, but equally positive. The sweetness caused a little consternation as one person thought it was all from refined sugar, but when I passed around the empty jar so people could check the label, she realised that the sweetness was mainly from the honey content (with the addition of a little brown sugar). The sauce is not particularly sweet, but there is just enough honey to make it interesting and to bring out the flavours of the spices. I could taste the ginger, but another person said it was more like five spice, and someone else said she could taste the soy sauce. However, no one flavour took over the others: the result was a harmonious blend of ingredients.

We thought the price was good. The label states that it feeds between four and six people, but we stretched it to eight and everyone had a good sized serving. If we had mixed the vegetables in with the meat, of course, it would have not gone so far. All of us will buy this product again - if it is kid friendly it must be good! - and maybe try it with different food combinations next time. Our friends thought it would be nice with lamb, while we thought it would be excellent with a firm fish. We will be swapping notes!

One bite and you'll Rethink Your Pretzel!