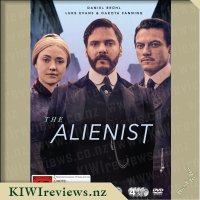 Disclosure StatementFULL DISCLOSURE: A number of units of this product have, at some time, been supplied to KIWIreviews by the company for the purposes of unbiased, independent reviews. No fee was accepted by KIWIreviews or the reviewers themselves - these are genuine, unpaid consumer reviews.
Available:
at selected retailers from May 2019

The best-selling book by Caleb Carr is the basis for "The Alienist," a psychological thriller set amidst the vast wealth, extreme poverty and technological innovation of 1896 New York. A never-before-seen ritualistic killer is responsible for the gruesome murders of boy prostitutes, and newly appointed police commissioner Theodore Roosevelt calls upon criminal psychologist Dr. Laszlo Kreizler, newspaper illustrator John Moore and police department secretary Sara Howard to conduct the investigation in secret. The brilliant, obsessive Kreizler is known as an alienist -- one who studies mental pathologies and the deviant behaviours of those who are alienated from themselves and society. His job, along with his controversial views, makes him a social pariah in some circles. But helped by a band of outsiders, Kreizler's tireless efforts eventually answer the question behind what makes a man into a murderer. 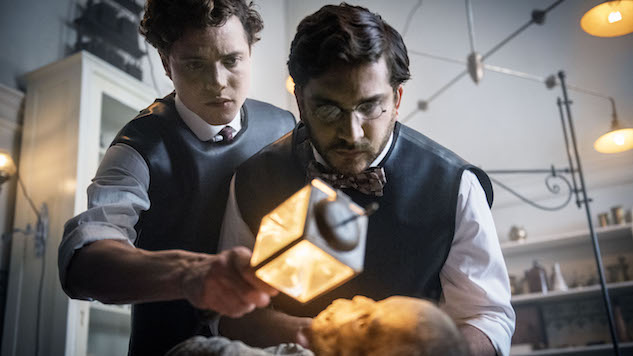 The Alienist is really quite a strange name for this tv series. Sure, they explain it at the start of each episode (An alienist is an old term for a psychiatrist/psychologist who works with mentally challenged people that are alienated from society), but it is such an old term that most people these days would simply assume the series has to do with extraterrestrial aliens. In all honesty, the main drawcard for the series is that is stars Dakota Fanning, Luke Evans, and Daniel Brühl because the title doesn't really give much else away.

Once you get around to checking it out though, the series cashes in on the intrigue around Jack the Ripper. Looking at how similar crimes (albeit fictional) would be solved in the late 19th Century, with differing technologies available, and many different social standards in regards to tolerances towards races and sexuality.

The set designs are brilliant, with great attention to detail, from the horse carriages to building layouts and structures, to the quality of roads, and even the demographics of those onscreen. Aesthetically, the show is authentic, going as far as to show a visible difference in air quality between city and countryside locations.

Period crime procedural shows are always intriguing, not only with the details of the serial killer cases but taking the opportunity to showcase a completely different side of society that was commonplace in those times. Now the area that this show focuses on is a killer that focuses on boy prostitutes; boys that dress up as girls and do "what girls will never do). It's an interesting aspect of the Victorian era, which combined with a team of Jews and Women, shows the less "perfect" side of the time, where intolerance, discrimination, corruption, and sexism were perfectly acceptable and par-for-the-course.

I also need to mention that the term boy "whores" (as opposed to boy prostitutes as it says in the synopsis above) is a term used in the series, and it is used very freely and frequently. If that is a term that does not sit well with you, then this series may well make you uncomfortable.

The Alienist creates an elaborate game of cat-and-mouse that is admittedly a slow builder but manages to become quite a thrilling escapade by the final episodes. I would almost have preferred the season to have been an extra 2 episodes long because just when the team were getting somewhere, we only had one episode left, which leads to an abrupt ending.

The Alienist feels like a darker Sherlock Holmes, with a much more cooperative feel to it. An intriguing premise that doesn't look away from more unconventional proclivities, and is unabashed in its plight to treat all people as equals. While visibly gorgeous, the pacing and writing don't really hit its stride until the latter half of the season, so the tension is not always where it should be. Here's hoping they can get the balance right in Season 2.

Allow us to present yet another CHALLENGES BONANZA crammed with volcanoes, World speed records, flying caravans, unstable Reliant Robins, jaw dropping races and cars exploding all over the place. No other programme offers so much for so little of your I.Q.