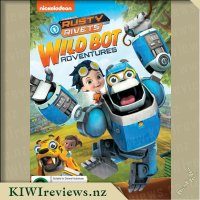 Disclosure StatementFULL DISCLOSURE: A number of units of this product have, at some time, been supplied to KIWIreviews by the company for the purposes of unbiased, independent reviews. No fee was accepted by KIWIreviews or the reviewers themselves - these are genuine, unpaid consumer reviews.
Available:
June 2019

Gear up and get wild...with Rusty's newest robotic helpers in 8 awesome adventures!

My children (and myself) absolutely love watching animated shows, we currently have a few favourite series, including Rusty Rivets. We have enjoyed Rusty Rivets since we were lucky enough to receive a different DVD of it to review not so long ago. When I saw there was a new DVD available to review I quickly jumped at the chance to request it, thankfully we were chosen.

Once we received the DVD we observed the appearance of the cover, on the front we see Rusty and his friend Ruby, also a robot tiger and a robot gorilla. The title "Wild Bot Adventures" had us all eager to see what kind of adventures they would go on. On the back cover we see that there are 8 exciting adventures with Rusty and his friends, included on the DVD is also a bonus Paw Patrol episode, which is the children's favourite animated show. The approximate running time of the disc is 94 minutes, and there is also a note indicating that going to the Nickjr.com website will provide you with free Rusty Rivets activities and printables.

Once the DVD started we were met by the unmistakable theme song, from the first episode the children were captivated by the vibrant colours, and the exciting characters. The first episode had some very mischievous monkeys who were causing trouble by stealing a ladder, the children were in hysterics. The children's favourite episode came next, this included a boy called Frankie trying to change Botasaur, and Rusty and his friend Ruby creating Tigerbot - this robot became the favourite character.
My personal favourite episode was the one where the S'mores went missing along with Botasaur, the mischievous monkeys were in this episode too. The children became quite upset that Botasaur may go over the waterfall and get hurt, thankfully Rusty and Tigerbot save him in the nick of time. The Paw Patrol episode was perfect timing as my 3 children had a dental appointment the following week, and were scared about going. Thankfully after seeing Chase and Alex going to the dentist they were not so frightened.

Overall we thoroughly enjoyed watching this DVD, and have watched it a few more times since the first viewing. I love how this show teaches about teamwork, kindness, and problem solving in a fun way. I think the target audience would be children up to around 7 years of age. We can't wait to see what new adventures Rusty and the team go on next, I highly recommend this show.

Cats is an award-winning musical composed by Andrew Lloyd Webber based on Old Possum's Book of Practical Cats and other poems by T. S. Eliot.

The show has been performed around the world in numerous productions and has been translated into more than 20 languages.

Now, after almost 4 years of negotiations, it has come to Palmerston North's Abbey Theatre group, for your pleasure.