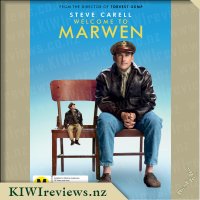 When a devastating attack shatters Mark Hogancamp (Steve Carell) and wipes away all memories, no one expected recovery.

Putting together pieces from his old and new life, Mark meticulously creates a wondrous town where he can heal and be heroic. As he builds an astonishing art installation - a testament to the most powerful women he knows - through his fantasy world, he draws strength to triumph in the real one.

In a bold, wondrous and timely film, Welcome to Marwen shows that when your only weapon is your imagination...you'll find courage in the most unexpected place.

Welcome to Marwen is a film the piqued my interest when I first saw the trailer but not enough to have me trying to get a babysitter so I could go and see it, so being able to watch it at home in my own time was a good alternative and I am pleased that I hadn't paid the money to see this on a big screen because whilst it's theme of overcoming pain and starting anew is good, the film itself wasn't fab. The film goes back and forth between Marks real world and the one he's created in Marwen, increasingly joining the two as the film progresses. I felt like the cast did a good job in portraying their characters and Carell was excellent as Mark but there wasn't anything that tugged at me leading me really feel anything for the characters, in fact, the only time I felt emotionally vested in the film was when it looked like Marks dolls and town may have been run over and destroyed.

The special effects were pretty well done, I liked the effect of having the dead dolls drop down, frozen in position as one would expect a doll to. Each character was easily identifiable as their doll counterpart and I kinda hope they all got to keep their personal doll. The soundtrack worked for the film, there was nothing memorable about it but it did what it needed to do. The deleted scenes are interesting to watch, not so much for the content but for the fact that we get to see the blending of the animation of the dolls and their real life counterparts. None of the scenes contained anything that had me wishing it had made it to the film, however I liked that they made sure to add on a little from the actual film, so you can tell exactly where in the film it sits, making it so much easier to know what the context of these deleted scenes are.

There's a clip about the cast but it's very short and doesn't tell you anything other than how happy the cast were to work together. This is followed by a clip about the director which didn't really tell my anything except how much the cast and crew love him, so it could have easily have been combined with the previous one. I enjoyed the building of Marwen, learning how they created the lookalike dolls and how whilst movie Marwen isn't like it's real world counterpart, it was done with the original in mind and how it's a hodgepodge of found and bought items. 'Living Dolls' was the most interesting special feature, giving more insight into how they used motion capture to make the dolls more like their living counterparts.

Marwen is a film that tries to convey a real life story and have you connect to the characters, what I found gave me a small insight into a horrible event but didn't manage to draw me in or hold on to my attention.

Dory is a wide-eyed, blue tang fish who suffers from memory loss every 10 seconds or so. The one thing she can remember is that she somehow became separated from her parents as a child. With help from her friends Nemo and Marlin, Dory embarks on an epic adventure to find them.

Her journey brings her to the Marine Life Institute, a conservatory that houses diverse ocean species. Dory now knows that her family reunion will only happen if she can save mom and dad from captivity.