Home > Categories > Movies > Fantasy > The Kid Who Would Be King review

The Promise of Puanga: A Story for Matariki review

ProdID: 8274 - The Kid Who Would Be King
Directed by Joe Cornish 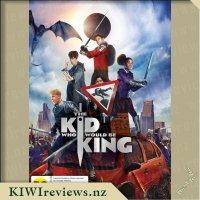 Disclosure StatementFULL DISCLOSURE: A number of units of this product have, at some time, been supplied to KIWIreviews by the company for the purposes of unbiased, independent reviews. No fee was accepted by KIWIreviews or the reviewers themselves - these are genuine, unpaid consumer reviews.
Available:
April 17th, 2019

The Kid Who Would Be King product reviews

A band of kids embark on an epic quest to thwart a medieval menace. Old school magic meets the modern world in this epic adventure. Alex (Louis Ashbourne Serkis) thinks he's just another nobody, until he stumbles upon the mythical sword in the stone, Excalibur.

Now, he must unite his friends and enemies into a band of knights and, together with the legendary wizard Merlin (Sir Patrick Stewart), take on the wicked enchantress Morgana (Rebecca Ferguson). With the future at stake, Alex must become the great leader he never dreamed he could be.

"Alexander Elliot, it was you who drew the sword! This realm faces mortal danger!"

Most people know the legend of Arthur and his knights, but in case you don't, a brief re-cap. Arthur drew the sword from the stone (Excalibur), proving himself the rightful king, he united the land and created his loyal band of knights (some of whom were once an enemy) and they became the knights of the round table. Merlin, a wizard, helped them and Morgana wanted to gain the sword and become ruler, she was, of course, defeated. The Kid Who Would be King takes place decades after these events when young Alexander, while on the run from bullies, finds and pulls Excalibur out of the stone.

Young Alexander is an outcast, he has one good friend and they are constantly bullied by two kids at school. Soon enough though, the four are teaming up in order to save Britain from Morgana who has been waiting beneath the Earth. What I liked about these four integral characters, is that the two bullies don't go through a quick change from enemy to friend, it is a slow progress throughout the film, with even Kaye admitting "we're not nice people". Merlin comes to aid the group, but he isn't there to run things or save the day, he can help but can't take over and I liked that, it meant that the kids had to dig deep and discover just what they could do themselves and with each other.

There are plenty of variety throughout the film. Alex missing his father and coming to grips with the truth and his relationship with his mother. The four children becoming a united front. Merlin was great entertainment, switching between an owl, a sixteen year old boy ("An ingenious alias in order to monitor you incognito", whilst constantly staring at Alex, so for an ancient being, he doesn't really know what being incognito is) and an elderly man. I really enjoyed Merlin's style of magic which consisted of various small hand movements, it would have take a while for the actor to learn them and my nine year old was attempting to follow along.

The film has some good action scenes as they flee from the flaming demons that Morgana sends after them, both a car chase and a horse chase, and then the final battle as hordes of them descend upon the school. There were a couple of moments when these fiery demons did't quite look as real as they could have, but they were well done overall. The car chase scene was particularly fun. The film tells us that only those knighted can see the demons, everyone else disappears when they arrive, so the kids are able to borrow a car with its keys still in the ignition. They finally defeat the last demon of the night and everyone reappears, including the woman who was driving the car and now has a child on her lap and three in the car. This scene, so full of action and then a hilarious end was well enjoyed by everyone. There were plenty more moments for laughs, which had everyone in the room laughing out loud.

The special features took us behind the scene, letting us know a little about the casting of everyone, just how passionate the director was and how involved he was (he had been thinking of this film since he was thirteen). There were also four small little clips featuring Merlin showing a different magic spell in each one, these were fun to see as I hadn't even known they existed. There was one special features that seemed a waste of time, I thought it was going to talk about their costumes but instead featured the main cast dancing in their various costumes, basically the DVD could have easily done without it. What I would have liked would have been a small bit about the special effects.

I really enjoyed this movie, usually I end up checking my phone or playing a game but this had so much to it that I spent a grand total of two minutes on my phone. My kids thought it was fabulous and can't wait till our next family movie night so we can watch it with their Granny.

Student Helen Lyle (Virginia Madsen) learns of the terrifying local legend of The Candyman - a hooked serial killer who appears when you say his name in a mirror five times.

Her investigations of the Candyman legend lead her to his fabled haunts. But when she ignores locals' warnings, a series of gruesome murders begins. Could the legend really be true?