« X-Men: Days of Future Past review

ProdID: 6163 - I Am Soldier
Directed by Ronnie Thompson 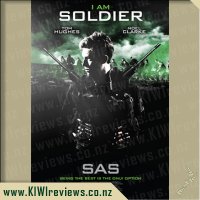 I Am Soldier product reviews

I Am Soldier follows Mickey Tomlinson (Tom Hughes), a military chef, who attempts the most dangerous military selection known to man: The Special Air Service (S.A.S.) selection. The S.A.S. is the United Kingdom's most renowned Special Forces Regiment, tasked with life threatening missions in some of the most dangerous places on the planet. Looking at the description of this film, I was expecting something along the lines of the classic opening act to 'Full Metal Jacket'; and to an extent that is what this was. But 'I Am Soldier' was definitely something that I would consider to be a low budget film. Taking place among only a couple of buildings and a field, and with only a few main characters, this film was very much limited.

Unfortunately this made the film appear rather two-dimensional, with a less than convincing romance, and only one character really captivating me. Noel Clarke is the saving grace to this film, with his character having the feel of a hardened soldier, who cares about his troops. He has a vibe that makes me want to have him in the armed forces.

Despite Noel's exceptional performances, the plot of the film ran dry once the "training" period ended, and the final climax of the film was less than satisfying. With poorly choreographed fight scenes, and dialogue that in some cases contradicts the training system of the S.A.S. this film left a lot to be desired. While I don't feel that this film was a complete loss, and I would not recommend against watching this film, it was not quite good enough for me to actively promote it. But Bravo, Noel Clarke. Bravo