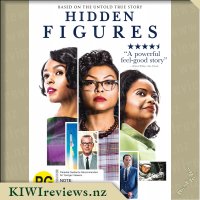 Disclosure StatementFULL DISCLOSURE: A number of units of this product have, at some time, been supplied to KIWIreviews by the company for the purposes of unbiased, independent reviews. No fee was accepted by KIWIreviews or the reviewers themselves - these are genuine, unpaid consumer reviews.
Available:
May 10th 2017

"Oh, I'll tell you where to begin: Three Negro women chasing a white police officer down a highway in Hampton, Virginia in 1961. Ladies, that there is a God-ordained miracle!"

I saw the trailers for this film and was half half in my thoughts about weather or not to go and see it, mostly because I don't watch a lot of 'based upon true stories, events etc.' I ended up being unable to go and see it when it was in the theatres but was keen to watch it, so getting this on DVD solved the problem. Hidden Figures is based on three black women (of several) who worked for NASA in the 1960's and surrounding years. All three women were real and in fact, at the time of this review, Katherine is still alive (98 years old currently). The movies gives us glimpses of the trials these three faced, not just as women but black women. John Glenn is also based on the real deal, the rest though are combinations so as to get a broad feeling for the attitudes and views of the times.

I tend to google movies such as this, to get the real deal behind the tale, for that's what this is, a tale, and so I can safely say (without any spoilers) that there isn't a huge amount of this film that is historically accurate but that's not to say that the experiences of these characters aren't realistic. Each character was well portrayed and played out wonderfully on the big screen. The leading ladies were brilliant and you really feel for them, and knowing that people went though, and in some places still do, go through this sort of prejudice, makes it more realistic.

There isn't a big call for special effects though I do like the use of old footage of astronauts, the president etc. being used within the movie. The music suits the film well, it was interesting (and most pleasing) to read that the big bids in charge insured that the music was evenly split between 'black' and 'white' performers, composers etc. I watched this with my kids and they were hooked, the questions came out thick and fast at the start and all could agree that they way the women were treated was 'stupid', to quote them. All three have since asked to watch it again, not something I expected, but they all thought it was funny and interesting.

Plenty of laughs, good quotes and a good lesson within, I'm looking forward to watching this again. 'We get to the peak together, or we don't get there at all.'

He wants to find out about the mysterious event that's supposed to take place at Hogwarts this year, an event ... more...