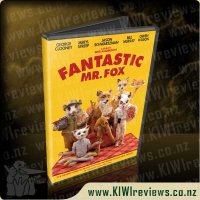 Fantastic Mr. Fox is a 2009 American stop-motion animated comedy film based on the Roald Dahl children's novel of the same name. This story is about a fox who steals food each night from three mean and wealthy farmers. The farmers are fed up with Mr Fox's theft and try to kill him, so they dig their way into the foxes' home. However, the animals are able to outwit the farmers and live underground.

"Fantastic Mr. Fox" is a feast for the eyes and a nice change from the usual animation.

From frame one, it takes no time at all to draw you into its beautiful visuals of vast countryside's, running streams and falling foliage, all in marvellous stop motion. I love stop motion movies as it's so easy to see just how much work has gone into the movie. Look out for a particularly funny scene during one of the nightly stake outs portrayed wholly through images on security camera monitors. Very, very well thought out and clever. Despite being a film aimed at children it is probably one of the most adult animated films I've seen to date with smoking, 'cussing' and some heavy handed adult humour.

I've watched this a couple of times now, once with my kids and once without. For me, personally, I really admire the animation style, and the voice actors did a really good job adding well to the overall effect of the movie. My kids weren't too keen on it, getting restless a few times, so I did feel in the end that this was more suited to the older viewers with just enough to attempt to be fun for the kids and they haven't gotten it down off the shelf since their first watch of it.

This is a fun movie, but not one I could watch too many times.

Fantastic Mr Fox is a film based on a Roald Dahl book that my then 6 year old's teacher read to her class. After reading the children were also treated to an afternoon of being allowed to watch the film. Miss 6 came home from school and told me all about it. Her retelling skills are amazing, and she not only had me captivated but also eager to hire out said film and watch it too.

I have never read the book the film is based on, and possibly never will. Just like I will never watch the film again, or recommend it either. If the film was as she had retold it I am sure it would have been brilliant. I do not know if age is a factor on this one but I just did not enjoy it.

In fact I must be getting old, as a number of happenings within the film really annoyed me, and then I found I was becoming increasingly annoyed at the fact she had watched it at school. The film portrayed smoking, violence, animal cruelty, kidnapping, attempted kidnapping, and even murder. It just really bothered me. The animation was also really kind of weird. I am sure for others the film may be quite enjoyable but for me it did not live up to miss 6's retelling.

However, in saying that Miss 6 really liked both book and film, and critiqued the film quite nicely, also pointing out the changes that were made between both the original story line and the film version. So I am quite pleased that she learnt a lot about that from it. But unfortunately not my cup of tea and I am glad I only paid $2 to hire it out.

Set in the vast snow kingdom at the top of the world, Arctic Tale is a real-life adventure from the people who brought you March of the Penguins. Join narrator Queen Latifah as she follows two very different arctic creatures, Nanu the polar bear cub and Seela the walrus pup, through exciting and harrowing struggles for survival.

Armed only with their natural instincts and mothers' guidance, these inspiring animals face countless trials and challenges in a beautiful icebound world that is rapidly melting beneath them.