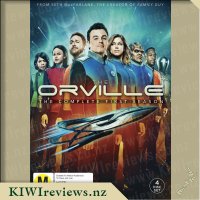 From Emmy Award-winning executive producer and creator Seth MacFarlane (Family Guy, "Ted", "Cosmos: A Space Time Odyssey"), The Orville is a live-action, one-hour space adventure series set 400 years in the future that follows the U.S.S. Orville, a mid-level exploratory spaceship. Its crew, both human and alien, face the wonders and dangers of outer space, while also dealing with the problems of everyday life.

Down on his luck after a bitter divorce, Planetary Union officer Ed Mercer finally gets his chance to command his own ship. Determined to prove his worth and start a new chapter, Ed discovers the first wrinkle in his plan when the First Officer assigned to his ship is his ex-wife, Kelly Grayson. As the new commander, Ed assembles a qualified -- but eccentric -- crew, including his best friend, Gordon, who has problems with authority but is the best helmsman in the fleet; Dr. Claire Finn; Bortus, an alien from a single-sex species; Isaac, an artificial life-form from a machine society; navigator John Lamarr; Alara Kitan, a young, inexperienced security officer; and Yaphit, a gelatinous creature. 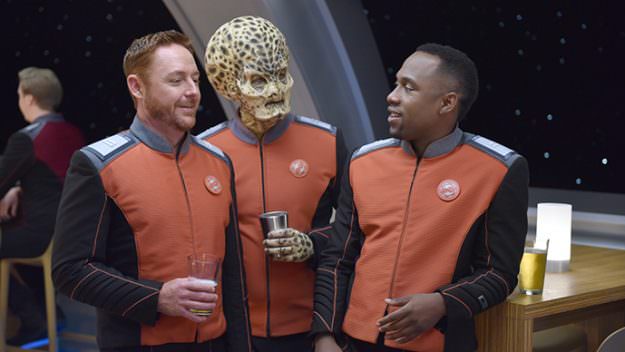 Looking at the DVD cover, you'd think that mentioning The Orville is from the creator Family Guy, would be a selling point for the show. While it is interesting to see Seth MacFarlane in a non-animated role, that simple line of text gives a false impression of the show. While categorised as a Sci-Fi Comedy Drama, this isn't a slapstick comedy in the same way that we expect of Family Guy. In fact apart from recognising the voice of Family Guy's Dog Brian, as Seth MacFarlane's natural voice, there is no connection between the two franchises in their content. This is simply a more casual style Star Trek-like series.

That is really as far as I need to go with the review. If you are a fan of "diverse" space exploratory series like Stargate or Star Trek, then you are going to enjoy The Orville. It's as simple as that. It does struggle with the same issues as the other series, where budgets prevent any strenuous effects from being able to be used, and as such, the crew is entirely humanoid (that is to say that apart from some prosthesis on the hands and faces, all crew members are pretty much shaped exactly like a human. The only exception is Yaphit, the gelatinous creature who serves a minor comedic role in the series.

One thing that can be said is that the series wastes no time in adding character development to the show. From the opening scenes of the first episode, we are sown the seeds of the dramatic elements that will resurface throughout the season. Rather than the usual way of having straight forward separate episodes to sell the exploratory aspect before slowly adding in backstories and character development, everything is merged in at once. Again, this is likely due to budgetary constraints and reduces the need for too much CGI in creating exciting new planetary environments and alien creatures.

Overall it is an enjoyable show. It provides a fresh take on things from a less strict standpoint, and the more casual vibe really helps bring some of the comedic elements forth, as that military oversight/disciplinary threat is far reduced. There are certainly some cringe-worthy moments, and is potentially a second thing that has carried over from Family Guy; taking a joke, and overusing it. The "pickles" line was funny the first time, and then it just became that joke that the teacher always repeats every time in school, but you feel obligated to laugh anyway even though you are rolling your eyes.

As far as the casting goes, Adrianne Palicki and Halston Sage (playing Kelly Grayson and Lt. Alara Kitan) were the standout performances in terms of emotional engagement and authenticity considering the sitcom environment. Scott Grimes, while entertaining comes off as being told "You are a Simon Pegg character" which has comedic value, but is difficult to take seriously. The series is also peppered with special guests, such as Charlize Theron, James Morrison, Robert Knepper.

One of the elements that the show does take very seriously is it's music. Another aspect that is a recurring theme in Seth MacFarlane's other works, is his support of the orchestra. In the case of The Orville, the show uses a huge 75-piece orchestra to provide the music in each episode, and it really shows, providing some extra depth to dramatic moments.

The visual environments are interesting, but again human-based, with every alien species having human-like appearance and having recognisably similar social structures. While not the most exciting environments in an exploratory space show, the internal dramas and ethical questions posed are the mortar holding the walls together. I'd be very interested to see where the series goes from here, especially if given a larger budget to work with.

Score: 10.0
Product reviews for listing 5695: Guess How Much I Love You. The Adventures of Little Nutbrown Hare: Father and Son -  Type of Show: Children's Cartoon

For the last 20 years, this endearing bedtime story about Big Nutbrown Hare and his son Little Nutbrown Hare's efforts to measure their love for each other has delighted adults and children the world over. This eight episode collection brings together the best father-son moments from the series.

This DVD contains a compilation of ... more...