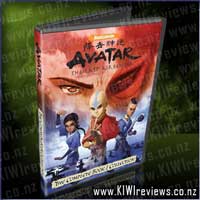 After a lapse of 100 years, the Avatar - spritual master of the four elements - has returned. Just in the nick of time. The Four Nations (Water, Earth, Fire and Air) have become unbalanced.

The Fire Nation wants to rule the world, and it's first conquest will be the Northern Water Tribe. It's up to a 12-year old Airbender named Aang to find a way to stop it. Join Aang, Katara, Sokka, Momo and Appa as they head off on the adventure of a lifetime.

Avatar, must be of the best cartoons ever created. The idea, that people can have elemental powers is exciting. The citizens of certain areas or disposition have a certain power (Earth, Fire, Air, or Water), living together in a form of balance. One person in a lifetime, known as the Avatar, has the ability to bend all four elements and is effectively the most powerful person in maintaining the balance between the four different elements.

The story of the fire nation attacking, with the goal of total world domination, is exciting, made more-so by the fact that the Avatar had been lost for many years, and only knows how to air-bend. With some friends he must travel the world, to learn to master all four elements, and stop the fire nation.

This is one of the longest continuous cartoon series storyline that I have ever watched. With the burdens of responsibility, worthiness, geographical barriers, cultural barriers, personal barriers, every character gets developed and the cast of characters is incredibly diverse. While the storyline is immense, with many different back-stories, this series doesn't rush. It even has some episodes that aren't directly plot-driven to allow for character development.

It takes its time because good things can't be rushed. Overall, this storyline consists of three books. And this book follows Aang and his friends as he tries to master water-bending. 20 brilliantly made episodes, with seamless animation, that is neither too garish nor too dark. A perfect balance.

The Legend of Aang is American animation that debuted as a TV series for three seasons on Nickelodeon and the Nicktoons Network. Whilst technically not considered 'Anime' because it originated in the Unites States, it is every bit Anime in my book. The Avatar universe and animation style draws heavily from Asian art, mythology, history and culture.

The great thing about this series is that being created in America, the humour and cleverness of the script is fully accessible to an english based audience - not odd or cheesy translations, as can happen with 'genuine' anime in translation.

The basic premise is that human civilisation is divided into four nations: the Water tribes, the Earth Kingdom, the Air nomads, and the Fire Nation. Each of these groups has a society based on their natural element, water, earth, air or fire. Within each society there are special individuals known as 'benders'. The benders can manipulate pretty much anything containing their element.

Over time, the fire nation has become quite powerful - and when a comet comes close to Earth, the fire Lord Sozin harnesses extra power from it and begins the wars to 'benefit' the other nations with the advancements of the fire nation....

Of course the other nations, who are being decimated and subjugated don't quite see it from the fire nation's point of view (how strange). They fight for their lives and their own cultural identities, whilst hoping against hope that the Avatar will return.

The Avatar is the only one in whom all four bending powers can be mastered. There is only ever one Avatar, and he or she is actually an extension of the same 'spirit' that is reincarnated each time the Avatar dies. The Avatar appears sequentially through the different elements; the last Avatar was Roku of the Fire nation. After he died, Aang was born into the Air nomad tribe. But when 12-year-old Aang learned that he was the new Avatar, he feared the responsibilities and the thought of being separated from his mentor, Monk Gyatso, before he was ready. Aang fled on his flying byson, Appa. But he was caught in a storm and crashed into the ocean. His protective Avatar state put him into a state of suspended animation within an iceberg.

(Here begins Book 1: Water)
One hundred years after Aang was frozen in the iceberg, Katara and Sokka (sister and brother from the Water tribe) accidentally awaken him. Aang now realises he must fulfil his destiny and restore balance to the world by defeating the fire nation. Being already a master of air, he sets out to master the other three elements with the help of Katara (who is an untrained water bender) and Sokka - who is brave, full of complaints, increasingly amusing, but not a bender of any kind (he does have a handy boomerang though).

So the quest begins...for most of their trip to the North Pole to begin training in water bending under a northern master, the group is persued by Prince Zuko (banished son of the current fire Lord Ozai) with his uncle General Iroh. Prince Zuko believes that capturing the Avatar is the only way he can restore his honour and be accepted back by his father...

The characters are just great. Quite unlike ordinary western cartoon characters, these characters develop and change in the face of their experiences as the story progresses through the episodes. My personal favourite is General Iroh of the fire nation: he is wise, patient, very humorous, and loves tea - he is also a powerful fire bender and so much more than what he appears on the surface...

The series was created by Michael Dante DiMartino and Bryan Konietzko, who served as executive producers along with Aaron Ehasz. The Complete collections come with bonus discs that are also well worth watching.

The Book 1: Water bonus disc takes you behind the scenes with the Avatar cast and crew, shows you the original pilot episode (complete with audio commentary by Michael and Bryan), also takes you inside the sound studios to see exactly how they created the sound effects, as well as sharing brief interviews with the many different production artists in the Korean studio where the animation was done.

Ever since I accidentally caught an episode from Book 2 on weekend TV, I have been hooked on this series. Full of action in every episode, they all retain their part in the overall tapestry that is the story of how Aang grows from a scared and immature kid into the mightiest warrior the world has ever known. Along the way he faces trials and perils we could never hope to survive, yet he somehow manages to make headway in his goal to rebalance the world, with the help of his friends and sometimes even his enemies.

You see, Aang is the current incarnation of the AVatar, a spirit that cycles it's way around the four nations, bestoying the power to master the art of bending in all four elements, something no mortal can achieve. Aangs journey starts out as that of a child wanting to explore the world as it is now, after 100 years of sleeping frozen in ice, but soon becomes a journey of discovery and learning as he tries to find a way to make sense of the madness he feels in the world, and rebalance it again.

Aang is joined by Katara and Sokka, two young members of the Northern Water Tribe who live in the ice floes at the northern polar cap. While out fishing, they discover Aang frozen in a block of Ice, along with Appa, his flying Air Bison. These companions turn out to be just very people Aang needs to accompany him on his quest. Motherly Katara helps keep Aang's youthful enthusiasm in check, while blustery and brave Sokka helps drive the group along and keep them on track, while still providing Aang with a male perspective.

Overall, the stories can be watched as stand-alones, each with it's opwn little dramas and morals, but when watched as a marathon session (like I did, twice) you are presented with a broader canvas, containing a piece of the bigger story. It works on so many levels. The series is great for kids of all ages, and is fun enough for the whole family to watch. Well worth the purchase, and I am very much looking forward to seeing the complete Book 2: Earth.

A twisted Dickens of a tale

Welcome to the adventures of Jedrington Secret-Past, upstanding family man and owner of The Old Shop of Stuff (just next door to the Old Curiosity Shop), where he sells a plethora of miscellaneous odd things. But this is no ordinary Dickensian tale. The Bleak Old Shop of Stuff is an entertaining adventure romp through cobbled streets full of hidden wills, brave street urchins, mysterious artefacts and ... more...