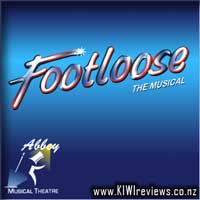 Disclosure StatementFULL DISCLOSURE: A number of units of this product have, at some time, been supplied to KIWIreviews by the company for the purposes of unbiased, independent reviews. No fee was accepted by KIWIreviews or the reviewers themselves - these are genuine, unpaid consumer reviews.
Available:
22 Nov - 15 Dec 2007

When teenager Ren and his mum relocate from Chicago to a small rural town, he is not prepared for the rigorous local laws. Years ago, following a night pf partying at a dance, a car accident claimed the life of four local teens, including the son of the local minister, Shaw Moore.

In a misguided attempt to honour the victims, the reverend pushed through a town ordinance banning dancing and in the process has kept alive a memory that can only foster pain. At the emotional heart of 'Footloose' is a boy longing for the father who walked out on him, and a man aching for the son he lost.

Thrust forward in time to the present day, this modern stage adaptation captures the same energy and sense of fun that made 'Footloose' one of the most poopular movies of the 1980's, and a cult classic. The score combines nine original songs, with all of the multi-platinum hits from the movie's Oscar-nominated score, including "Footloose", "Let's Hear it for the Boy", "Almost Paradise" and "Holding Out for a Hero".

It has been 27 years since the event that inspired the movie, and 20 years since I saw the movie as a re-run (and I admit to not recalling much of it except one energetic dance scene), so I figure I had a pretty 'clean slate' mindset, which I always prefer... it means I can assess the performance on it's own merits, rather than forever be comparing it to a previous experience.

The show opened quite suddenly with the title track and the cast springing onto the stage dressed in, what apprently is modern fashion, but to me looked like 80's fashions revamped with modern cellphones. (Back then, kids didn't HAVE cellphones, let alone ones that fit in your pocket!) I was pleased to see some familiar talent appearing, in the form of Carrie Green (star of such local performances as Cats, Oliver and Les Mis amongst others), Richard Rewa (locally famous for his rendition of Mungojerrie in Cats) and Daniel Goodman. This bode well for the show, to me.

To spare those who know the story a tedious recap, I will leave out the majority of the plot, and instead focus on certain aspects I noted... there were a few scenes that, for obvious reasons, were left out of the stage production, such as the game of 'chicken' with tractors, and a few other non-key scenes were changed slightly. When Ariel takes Ren to the trainyard in the movie, well, it could have been made to work in the stageshow, but was instead transformed to a clifftop where she howled out a retort to the train passing below. The rock'n'roll scene at the drive-in diner was replaced by a scene behind the gas station where the 'hoods' hung out and smoked pot and drank beer, the Reverend arriving to give Ariel a sweater instead of money... not too bad a set of substitutions actually.

One scene that perhaps didn't come across as well as hoped was the rendition of "Holding out for a Hero"... with four girls who looked like they would have been more at home in 'Cabaret' or 'The Rocky Horror Show' taking the back row, cast in the middle, and a team of dancers who could not have looked more like an abridged version of 'The Village People' if they tried! The whole scene was spoilt by the audience unable to keep faces straight and giggles withheld.

By far, the scene that really caught me was near the end of Act 2... in the Church... When Sue Philips-Paton sang "Can you find it in your heart"... well, it was, for me, the single best song of the entire show. Her passion, her emotion... it was all so genuine it could not fail to capture the hearts of the audience. More than a few damp cheeks at the end of that song... and the revelations in that scene for the Pastor, the realisations of how it must feel to lose a child... something every parent dreads. Our kids really are "...our brush with immortality..." and so to watch as that spark of future hope dies, it's the single most terrifying thought for a loving parent. As a father myself, it caught me up and really spoke to something inside me.

A few general comments... the sound system is in DIRE need of attention, with some of the supporting roles being clearer and easier to hear than most of the lead performers! The leads were also somewhat stilted and didn't 'flow' as smoothly as they have proven themselves capable of in the past. Maybe it was opening-night-jitters... for their sakes I hope so. They need to relax and go with it. Speaking of opening night jitters, the stage crew did a wonderful job with construction of the sets, making them highly multifunctional (a pet topic of mine), but they just couldn't seem to get them shuffled into place very quickly, often holding up the performance, or having to work around cast entering the stage.

Overall... this was still a very enjoyable show, but a few technical glitches took the shine off what could have been another stunning gem in Abbey Theatre's crown. There was some great drama, and some excellent humour... the later fiocussing around the character of 'Willard', exemplified by Richard Rewa. If the cast got their polish on, I would say this show could easily rank right up there in their scrapbook of memorable performances.

Footloose is a movie I have loved since I was a child... the music, the dancing, and of course... Kevin Bacon!! But done as a musical stage show?? Could they really pull it off? Well, they certainly made a darn good attempt to!!
Settling into my seat, I scrolled through the cast list, and was delighted to see Carrie Green's now very familiar name pop up. Ok, this had to be a decent show if she was in it! The show started with an adaption of the theme song, and there were already signs of things not going all that smoothly. The Abbey Theatre seriously needs a decent sound system, as this is not the first show to have been let down by poor sound quality. It continued on through the show... and strangely enough, seemed to be more the Lead actors who were to suffer. There they were, singing their hearts out, and we were lucky if we caught the odd word or two from each song! And we were sitting right up front. The support cast and smaller roles were fine, it really just seemed to be the main characters who struggled to be heard. I guess it didn't help either with the band right up front, off to the right, as I ended up with one ear filled with the music from them, making it even harder to hear the songs and dialogue.
Another let down, (and I seriously can't believe I'm about to say this about her, after seeing so many other stunning shows starring this particular young actress), was Carrie Green's performance. Every other show I've seen her in, Carrie has been natural, with a gorgeous voice, and an absolute pleasure to watch act. This time she seemed stilted, uncomfortable with the role, and overacted a lot of it... plus her voice had lost a lot of its usual power. Most disappointing!!! But I will admit, it wasn't just Carrie who seemed to be overacting in places... several of the main actors seemed to suffer from this. Andrew Jamieson as Ren, Renee Pink as Rusty, and Jared Gardner as Chuck Cranston were all guilty of overacting off and on during the show. Yet they all also had as many moments where their performances were a pleasure to watch. Ren and Ariel's "Almost Paradise" showed a lovely harmony, and Ren's "Dancing is not a crime" was fun and lively... when you could actually hear what he was singing.
Another familiar face I was pleased to see was Richard Rewa, who I had first seen in "CATS" as Mungojerry. Richard was perfectly suited to the role of the sweet, yet slightly dorky Willard Hewitt who becomes firm friends with Ren. Originally played in the movie version by Christopher Penn, Willard has always been one of my favourite characters in this show, and thanks to Richard's performance, that hasn't changed. His (almost) solo of "Mama Says" was funny, lively... and was a great example of Rewa's wonderful voice, that was lucky enough to be unmarred by technical sound problems!! Rewa is indeed another actor I will be keeping an eye out for in upcoming shows!
Paul Lyons was one of my favourite actors in this particular show as the seriously strict Reverend Shaw Moore. His voice was deep and rich when he sang, very much a pleasure to listen to, and he did a great job of capturing the Reverend's inner emotions over the death of his beloved son, Bobby. I loved his very touching and emotional solo "Confess", and all the way through the show, his performance strongly reminded me of John Lithgow in the same role in the movie. He sounded similar, and the way he acted was very very similar.
As a kid, it was always the music side of the movie that caught my attention, and I barely noticed the story behind it. Watching the live stage show version, I found the deeper story behind it hit home a lot more this time round, and the different parts of it were easier to spot... a daughter's struggle to be noticed by her father, a son's sense of loss and confusion at the absence of his father, a father's pent up grief over the death of a beloved son, and the warmth of a growing friendship that helps bring Willard out of his shell.
Despite the negative side, I still thoroughly enjoyed Footloose, and would recommend it to anyone who enjoys a musical, the movie version of Footloose, or just enjoys a fun show with a good story!

Haven is an American/Canadian supernatural drama television series loosely based on the Stephen King novel The Colorado Kid (2005).

A shrewd FBI agent with a lost past who arrives in the small town of Haven, Maine, to solve the murder of a local ex-con only to discover that the curious enclave is a longtime refuge for people with supernatural powers that holds a lot of secrets, including to her own past.