I am Rebecca review 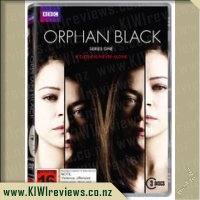 Sarah (Maslany) is an outsider and orphan whose life changes dramatically after witnessing the suicide of a woman who looks just like her. Sarah assumes her identity, her boyfriend and her bank account but quickly finds herself caught in the middle of a deadly conspiracy and must race to find answers about who she is and how many others there are just like her.

As Sarah searches for answers, she uncovers an earth-shattering secret and soon learns someone is trying to kill them off, one by one. Filled with surprising twists and turns, this addictive new series will keep you on the edge of your seat from start to finish.

When I was a young pre-teen I read a series (aimed for my age group) about a young girl who discovered she was one of many clones, and thus had a great adventure and so forth, so when I got the chance to review Orphan Black I was VERY happy.

Sarah jumps about, from place to place, grift to grift, dealing with drugs etc. when one day at the train station a woman jumps in front of the train committing suicide. But here's the catch, the dead woman looked EXACTLY like her... Sarah jumps head first into Beth's life and what she discovers changes her life forever, she is a clone. What happens next is a whirlwind as Sarah tries to find out more about where she comes from and we meet a range of characters from her foster brother and mother, her daughter, creators and fellow clones.

My least favourite thing about the season would have to have been one of the main pieces of music, but that was because it reminded me too much of a different TV series. Now Tatiana does an amazing job, not only in the main role of Sarah, but she has to play about six other characters, which all have different personalities and even accents, and she pulls every single one of them off. It was easy enough to really get into the show and to get to know each character, they might be clones but beyond their looks and DNA they are nothing alike.

The storyline is well done, it gives you enough information to satisfy your thirst for information, gives you a tiny tiny bit of history and a hint of what is to come but really focuses well on the here and now. I can't wait for season two to come out on DVD, it is on my must watch list.

I was told that this series would be interesting and thought provoking to watch and although I'm against cloning on ethical and moral grounds I put this aside and watched the series and realised that I did actually enjoy this series. It made me think about things and wonder about a few things but still hasn't changed my mind about cloning.

Tatiana Maslany did a fantastic job of playing the various clones, each with different personalities and histories and knowledge about clones and possible health problems. The other characters were great, some knew about clones and some just thought that an unknown twin sister had suddenly been discovered.

The series did a good job of making some points and having sad moments and some funny moments even though I'm not sure that some of the scenes were supposed to make me laugh. The characters have to learn who they can trust and who has their best interests at heart.

I was a tiny bit impatient and googled to see if I could find out if they ever discover who the original was and what happens to each one and all I could really find out is that they are busy filming series 3 so I know I will be watching a lot more Orphan Black in the future. Glad to say that Google didn't offer a lot of spoilers.

I wouldn't recommend this series to people who are against cloning and who can't put that aside to watch and remember that the actors are just doing a job and following a script. Just because it is on TV doesn't make it real and this series does raise some questions that a lot of "normal" people face as well.