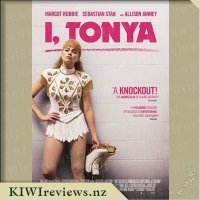 Disclosure StatementFULL DISCLOSURE: A number of units of this product have, at some time, been supplied to KIWIreviews by the company for the purposes of unbiased, independent reviews. No fee was accepted by KIWIreviews or the reviewers themselves - these are genuine, unpaid consumer reviews.
Available:
in cinemas 25 January 2018

Competitive ice skater Tonya Harding rises amongst the ranks at the U.S. Figure Skating Championships, but her future in the activity is thrown into doubt when her ex-husband intervenes.

This is based on a true story. A story that I had no knowledge of (I'm 29), but a story I now realise I have seen referenced before on multiple occasions (one example of which involves an episode of the Simpson's where Moe is orchestrating an "accident" to prevent Mr Burns from taking part in their bowling team). Needless to say, it is interesting to come across the source after seeing the references. But I digress.

I, Tonya is based on a true story; a story created by stitching together multiple contradictory eyewitness accounts of events. The end result is part comedic, and part unreliable, as the characters that are reenacting the scenes, frequently break the fourth wall, to refute the testimonies of the other characters. It almost comes across as an argument between several people being played out word for word, without any editing. Narration, commentary, contradictory statements are all par for the course in this film.

But it is well done. I had no idea that a film about a figure skater from the 80s and 90s would have engaging characters, and yet this is what I found. You come across many situations that are incredibly relatable, whether it is the recognition of the emotionally absent mother, the abusive partner, the differences in treatments of differing social classes. These are portrayals of real people, and the viewers can really empathise and sense the frustration, fear, and anger, that the characters exhibit on screen.

Casting was superb. Not being aware of the story, or who any of the characters were beforehand, I thought perhaps they had gone with a purposefully over-the-top, dated, stereotypical, "white trash" look. Having seen Margot Robbie and Sebastian Stan looking amazing in their respective DC and Marvel movies, to see them in a film like this felt incredibly out of place. But wait until the credits. You will be shown footage of the real people, where you can see samples of the scenes that they were recreated from, word-for-word (even the more unbelievable parts, I'm looking at you, Shawn Eckhardt).

The flow of the film works well up until the tail-end of the film. The viewer watches the struggles of Tonya Harding as she works her hardest to be the best she is at what she does, attempting to overcome prejudices, abusive spouses, lack of funding, towards her final goal of performing in the Olympics. A section of the film that is glossed over with a simple narration rather than a reenactment. From a film studies perspective, it is a choice that denies us the payoff that we've been waiting for which is arguably the same thing that happens to Tonya Harding .

Personally, I enjoy getting a good payoff in a film. It helps the feeling of completion, but truth be told, the way the film has been done is the strength of the film. It doesn't take sides. It portrays all points of view. It doesn't try to glorify people or paint them in a better light. It's starkly honest, and it hits home. Emotionally engaging. A must-watch.

NOTE: Audio is in Spanish, with English subtitles.