It also features two cut-out models on the back cover. 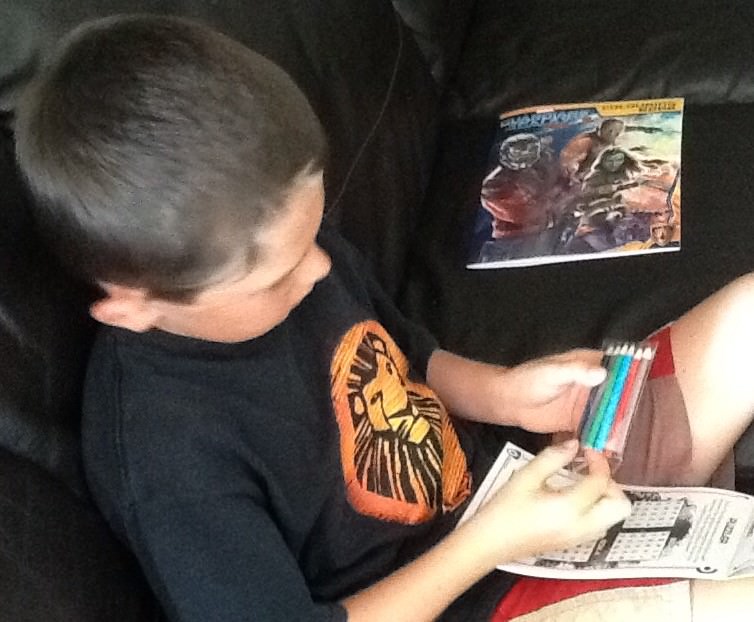 Mr Eight was pleased to see that this pack comes with its own colour pencils as it meant that he could start on a picture straight away without having to go and hunt for some. He thought that six pencils were about right for most things. There was a good range of colours and since the Guardians colour schemes tend to be quite dark, the selection of shades was appropriate.

He started on the smaller puzzle book first but found that some of them were a bit too easy, so he finished them in record time. He completed what was supposed to be the most challenging puzzle in 14 seconds! However, he also found it distracting that the answers were printed underneath most of the puzzles - in small letters right at the bottom of the page, but nonetheless it might be tempting for some people to cheat and just look at the answer. He thought it would have been better to include all the answers at the end of the pad.

Mr Eight thought that if you wanted to do an easy activity that would keep you occupied and not get bored - as when you are waiting to land in a plane or when you are doing a really long car trip - then this would be good. But when you have a shorter trip or want something that gives you more of a challenge to extend your mind, it might be better to read a book (he suggested "The Hobbit" which he has just finished), or play a strategy game like Solitaire or Backgammon or Ludo which can be played on a small electronic device or a travel set.

Some of the activities needed creative input which made them a little more interesting. The reader had either to draw a missing piece, design an item to complement what was already there, or supply some missing text. Unlike the puzzles that had only one possible answer, these activities required more imagination so posed more of a challenge. Colouring is something that Mr Eight can take or leave; unlike some of his friends, who are addicted to colouring in, he prefers variety so this pack with its two separate booklets does satisfy that.

The two free-standing cut-out figures on the back cover provided some extra fun. Mr Eight is pretty competent using scissors now although a smaller child might need adult supervision. He took his time cutting round the edges, being extra careful to follow the outline as well as he could. The finished products are now standing on a shelf in the front room beside his Lego and other toys.

I think this product would be more suitable for a younger child as the activity level was quite uneven. However, it is also common that not every child will be into every activity in a book: there will invariably be a few blank pages at the end of the process. And even when he has finished with the books themselves, Mr Eight is left with two models on his shelf and six nice nice new coloured pencils!

Spellbinding, unforgettable, and an important chronicle of modern China.

Sisters Tiao and Fan grew up in the shadow of the Cultural Revolution where they witnessed ritual humiliation and suffering. In the China of the 1990s the sisters lead seemingly successful lives.

In 2006 Tie Ning was elected president of the Chinese Writers Association, becoming the youngest writer and first woman to be honoured in this ... more...