Super Diaper Baby 2 - The Invasion of the Potty Snatchers review 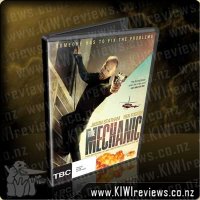 Arthur Bishop is a Mechanic - an elite assassin with a strict code and unique talent for cleanly eliminating targets. It's a job that requires a professional perfection and total detachment, and Bishop is the best in the business.

But when his mentor and close friend Harry is murdered, Bishop is anything but detached. His next assignment is self-imposed - he wants those responsible dead. His mission grows complicated when Harry's son, approaches him with the same vengeful goal and determination to learn Bishop's trade.

Bishop has always acted alone, but he can't turn his back on Harry's son. But while in pursuit of their ultimate mark, deceptions threaten to surface and those hired to fix the problems become the problems themselves.

I am a huge Jason Statham fan, and I was looking forward to watching another of Jason's movies. I wasn't disappointed, this contained the right mix of action, clever thinking and a slightly twisting plot.

"Do you know what a Mechanic is?" "A hitman, and I wan't to do what you do" - and so the loner becomes a mentor, in a movie where the plot shifts enough to keep you engaged and your just not sure who to trust.

There are a few big names in this film, and they play their parts well, the special effects are high powered and slotted in throughout the movie to keep you enthralled, all in all this a film that I would add to my DVD library, one that can be watched multiple times. - I must add that this is not a romantic quiet evening in movie, but definitely recommended for those who like action and thrills.

First off lets remind ourselves that the movie 'The Mechanic' is an action film, it also stars one of the current stars of the action genre, Jason Statham.

Like most movies these days it is a semi remake of the a movie with the same name made in 1972, now I haven't seen the original, and only get told what is a remake by my dad.

It has action, some of it believable, some of it not so much, but not to the extent of say The Transporter, and it has somewhat of a story line running through the whole movie.

I think the acting is about as good as you are going to get with a pure action film, there aren't too many characters to keep track of, no major twists, and a somewhat predictable ending, but it is what it is, and for an action film I liked it.

So chuck it in, and see what a mechanic really does.

Ever since I saw the second 'Transporter' movie I thought Statham was a great action star... I've enjoyed him in actions rolls, and in more serious roles such as 'The Bank Job', and found much to like about his style of acting...

But I have to say this... this was a real disappointment. Primarily due to a flat, lifeless and VERY predictable plot, Statham didn't get much chance to shine. A similar plot featured in the movie "The Specialist", but with Sylvester Stallone and Sharon Stone as the two lead cast. THAT was brought off with a lot more tension, drama and style IMHO.

Ben Foster's performance is also rather flat... akin to his brief foray in to the mutant world in X-Men 3 : The Last Stand where he played 'Angel' - the chap with the wings.

Overall, I would hardly deem this a total failure... but I would be hard pressed to call it a raving success either. For some evening 'chewing gum for the eyes' this will do a great job, but if you are after something that will leave you buzzing... try a 9-volt battery on your tongue. At least that will give you a buzz the second time around as well.

After receiving organ transplants from various animal donors, a man finds himself taking on the traits of those animals.