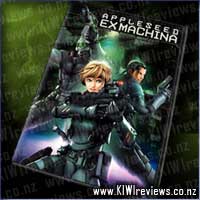 NZ rating 'M' - suitable for audiences 16 years and over

John Woo and Shinji Aramaki merge talents to create a futuristic thrilleradapted from the popular Japanese Manga series by Shirow Masamune (Ghost in the Shell).

Special forces soldiers Deunan, Briareos and Tereus battle to preserve peace in the city-nation of Olympus, until a stealth attack by zealots turns the city into a perilous war zone. With revolutionary computer-generated technology, breathtaking action and rich storytelling, this fantastic adventure pits man against machine in a battle for survival.

Appleseed Ex-Machina is a gritty and brilliant sequel to Appleseed.

Olympus is suffering increasing cyborg attacks - threatening peace in this city that would be 'Utopia'. Even ordinary citizens are joining in the attacks... It appears that a new and hugely popular entertainment gadget the 'Conexus' is being used to manipulate the behaviour of its wearers...

But who is behind it all, and what is their game? Prime Minister Athena has proposed that Olympus be given control of all world satellites in a bid for global security.

In this second Appleseed saga, Deunan Newt and Briarios are joined by a new character 'Tyrius' - a bioroid mostly cloned from Briarios' DNA. He looks exactly like his genetic donor and Deunan is hopping mad when ordered to take him on as a partner while Briarios is out for the count in hospital.

Robotic doves... an evil doctor... mind altered citizens... Briarios infected with remote-controlled nano-machines... What is it all leading to?

Highly recommended viewing. If you enjoyed Appleseed, you will not be disappointed with Ex-Machina.