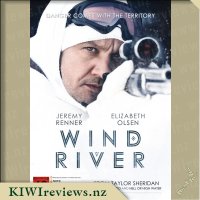 In a role critics are calling one of his best performances, Academy Award nominee, Jeremy Renner is Cory Lambert, a local game tracker. Out on patrol he stumbles upon the body of a murdered teenage girl, frozen in the desolate wilderness of the Wind River Indian Reservation. Still trying to come to terms with the death of his own daughter, Cory is forced, most brutally, to confront his own past.

When rookie FBI agent Jane Banner (Elizabeth Olsen) is assigned to the case, she enlists Cory's help to navigate the unfamiliar terrain and unforgiving conditions as the two venture deep into a world ravaged by violence and the elements.

Wind River is a start look at life on the edge of an imposing wilderness, where the rule of law is eclipsed by the laws of nature.

When you're hot and sweaty and trying to relax in 26oC heat, watching a movie based in a freezing desolate wilderness is just what you need! I put the fan on and looked forward to watching Wind River, described as 'more than just another action thriller' by Screen Daily.

If you're a fan of Jeremy Renner, (from The Avengers and Mission Impossible films), then you won't be disappointed with his performance as Cory Lambert, a local game tracker and expert marksman who has the misfortune of stumbling upon the body of a teenage girl who has been murdered. The start of the film follows Lambert's day to day life but this changes when rookie FBI agent Jane Banner (Elizabeth Olsen) arrives. She is tasked with establishing that a murder has taken place and who is responsible. From then on, we get to view the bleak surroundings from her perspective and what we see is an unforgiving and male orientated world.

Featuring sweeping shots of snow, blizzards, more snow and a few 'fine' spells the scenery, for the most part, is stunning and demonstrates the mood of the story.

Olsen plays Banner convincingly and comes across as a suitably inexperienced but very eager agent who wants to see justice served. The film is set in Wyoming on the West River Indian Reservation and Banner requests Lambert's help to navigate the harsh environment. They form a great team with a natural screen chemistry, helped by them working together in previous films. I was also pleasantly surprised to find that Taylor Sheridan did not add any unnecessary romance between the two to detract from the main storyline. There is lots of meaningful dialogue and some moving monologues between Lambert and Martin (father of the murdered teenager) with plenty of narrative twists and turns to keep up the suspense. There is some impressive but brutal action which was a little unexpected and a flashback to provide a thorough explanation of what happened which is a sombre conclusion.

The films finishes on a dark note by stating the real-life revelation that Native American women are the only demographic for which no missing persons information exists. With believable and excellent acting, Wind River is an intelligent and provocative film that keeps you entertained throughout and is definitely worth watching.

Too much of a good thing is even better.

It's a British invasion of a different kind when Garfield (Murray), along with pals Jon (Meyer) and Odie, travels to London and meets his mirror-image in Prince, an aristocratic kitty who has inherited a fabulous castle. The two trade places, and soon Garfield is living ... more...