ProdID: 5182 - Alien VS Predator: Requiem
Directed by The Brothers Strause 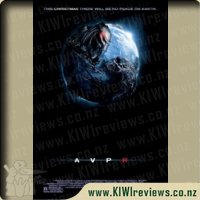 In Gunnison County, a spacecraft crashes in the woods bringing a powerful hybrid Alien hosted inside the pilot Predator. A local, Buddy Benson, and his son, Sam, are hunting in the forest and witness the crash, but they are chased and killed by the Alien. Meanwhile another Predator lands on the spot seeking out the Alien and destroys evidence of their presence on Earth. The dwellers of the town find themselves in the middle of a battlefield between the two deadly extraterrestrial creatures, and the small group of survivors splits between the leadership of Sheriff Eddie Morales and the bad-boy Dallas Howard. Both have different opinions about the best means to escape from the beings.

This film turned out better than I was expecting. After the let down, that was Alien Vs Predator, I had very little hope for Alien Vs Predator 2. The opening scene followed on from the preceding film, with the alien-predator hybrid, ending up back on earth. Another predator arrives to try kill it, and lo and behold, there are humans stuck in between yet again. Humans always be getting in the wrong places.

I feel that this film was an improvement, due to the open plane of the environment. They weren't just trapped within a temple; they could escape if they wanted to. The issue that the humans had was 'how?'. This was what was missing from the preceding movie; proper characters, with back-stories, and different attitudes. It added another dimension to the film , beyond humans being nothing more than animals with differing amounts of time to fill before they get slaughtered.

With the improvement in character strength, and better interactions, this film was preferable to the first Alien Vs Predator. That being said, it still fails to stand up to the original Predator and Alien movies. I hope one day someone will make an amazing film that incorporates both of these creatures. But AVP and AVP2, certainly are not them.

Alien vs Predator 2 follows on from the end of the first movie, one can assume, since the final scene had an alien bursting out of a predator corpse.

Now for some reason, this never occurs with any other creature, they decided that an alien birthing inside a predator would lead to an alien predator hybrid. Naturally it kills all aboard the ship and the ship just crashes back down to Earth. Not long after a lone predator lands on Earth, gets rid of the evidence and sets off on a hunt for the hybrid as it racks up the body count. A small group of people, including a military officer, first try to stop it and then simply try to escape for as the military officer states that the small town will be bombed before too long.

There's a lot that takes away the credibility and believability from this movie, first the hybrid, then the quick response time from the military (or not so quick if you are one of the townspeople), everything about this movie wants me to run away screaming, my husband wants to own it, but only so he has the full set (and even then it better cost less than $5). There wasn't much I enjoyed and particularly hated the hospital scene which had been turned into an alien nest, that in itself would have been fine had we not had to hear the newborn babies crying nor see the in labour mum have an alien burst out of her.

The original Alien and Predator movies must be rolling in their graves.

A wannabe serial killer wins the lottery and pursues his lifelong crush.